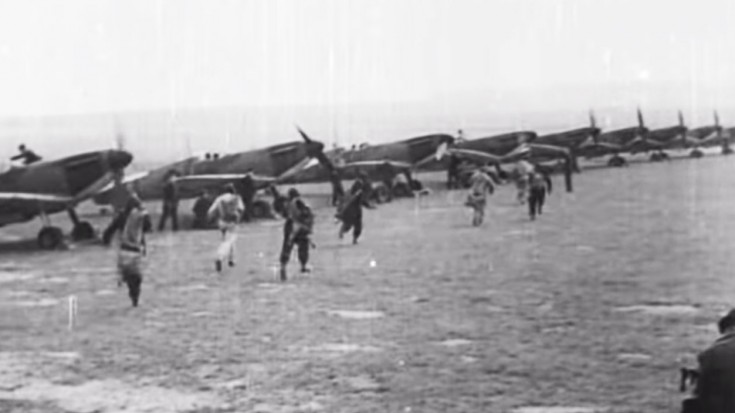 As Always, You Can Count On Some Colorful Commentary Thrown In By The Narrator

This short but sweet newsreel footage was most likely intended to recruit young people to join the Royal Air Force. It shows some great clips of British fighters scrambling to get to their planes and as per the commentary, this was probably filmed during the Battle of Britain. Showing lots of footage of Spitfire pilots shooting down Luftwaffe pilots, this piece was meant to inspire confidence in the fight.

In the cockpit of their Spitfires before you can say ‘Bob’s your uncle.’-Narrator

At the end of the newsreel, the cameraman pans over a shot down Nazi plane, the narrator commenting that the shot down Nazi pilot mentioned second guessing flying over Britain in the first place. Another interesting fact mentioned is the fact that the Luftwaffe were losing one plane every 42 minutes, which we cannot confirm nor dispute as we were not statisticians during that time. It is historically accurate however to say that Germans greatly underestimated the size and capabilities of the RAF and the final outcome was a definitive Allied victory.