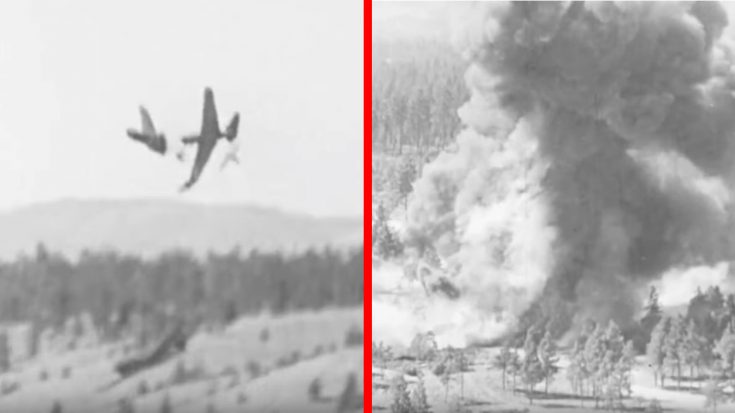 Flight is one of the safest methods of travel but that doesn’t mean there aren’t risks involved. During World War II, pilots endured rigorous training to ensure that they would remain as safe as possible in flight. However, there are still factors that come into play that threaten the safety of pilots and at the front is human error.

Pilots like to think that they can always count on their wingmen to back them up on missions. But sometimes in close quarters mistakes can be made while flying, as is the case with this film. This newsreel shows two fighters practicing for an airshow in Spokane, Washington. As you can see they get a little too close during a sharp turn and that’s when things start to go south.

The fighters collide and then shatter into pieces before crashing to the ground where the forest is set ablaze. This was put together but Jack Lieb, the guru of war newsreel film in order to demonstrate the dangers of flying.

“With camera in hand, Lieb landed on Utah Beach to film the invasion of Normandy. The lecture footage shows some of the lighter moments when the war correspondents and soldiers had downtime, but the job was not safe or easy.”