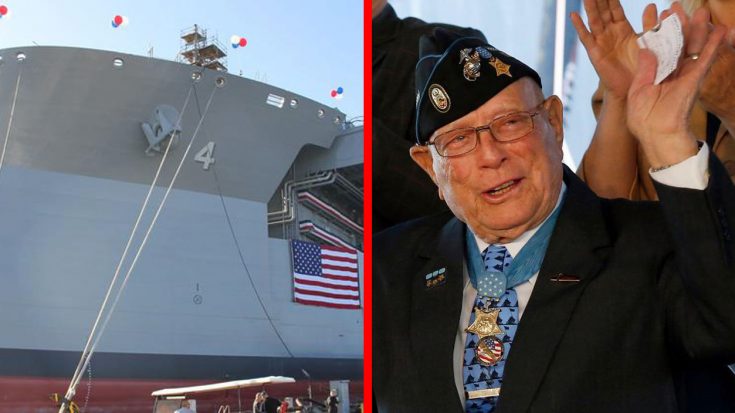 As an American flag was being raised on the island of Iwo Jima Hershel “Woody” Williams didn’t stop to celebrate, he had work to do. Although the flag raising over Iwo Jima became one of the most iconic visuals of WWII, Williams got to work fighting the Japanese to become one of the most iconic heroes of WWII and willing the Medal of Honor. Now the 94-year-old living legend has received another great honor, a gigantic naval vessel named after him.

At a ceremony in San Diego, California the United States Navy christened their newest vessel the USNS Hershel “Woody” Williams in honor of Iwo Jima’s last surviving Medal of Honor recipient. A huge audience paid tribute to his heroism and Woody was brought to tears by his the support they showed. This was all possible thanks to a special petition that pushed towards honoring Medal of Honor recipients.

“The U.S. Department of the Navy compiled the largest file they have ever received for the request to name a U.S. Navy ship. The file contained over 70,000 signatures from 48 states.”

The vessel will go on to provide aid to those in need and people around the world will know of his heroism in one of the most vicious conflicts in history. Footage of the christening ceremony can be viewed in this clip.