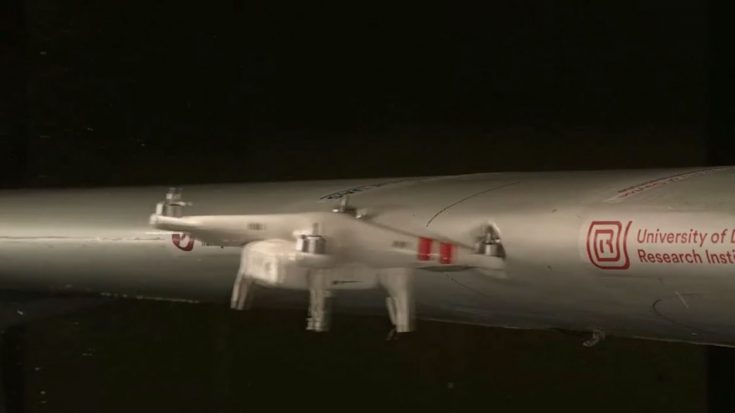 Watch The Entire Report Below.

As with anything new in this world, the government has history of reviewing it and regulating it almost immediately to see if people can be trusted. Whether this is right or not is another discussion altogether, but today’s topic is drones.

As of the early 2000s, the availability of personal drones skyrocketed. With the advent of smartphones, cheaper electronics and new drone technology anyone can snatch one up for as cheap as $100. Although fun and enjoyable, this potentially puts thousands upon thousands of these drones in the air without anyone being formally trained of when and when not to used them.

This, as you can imagine, can pose a problem. Just watch the video below. A man was mere feet away from flying his drone over a landing aircraft in Las Vegas las year.

This incident, and many like it, spawned a conversation about what is safe when it comes to drones so just recently the UDRI Foreign Object Damage Lab conducted a test. They’ve done similar ones with birds in the past, but now they projectile personal drones at various parts of an aircraft. The results were stunning which you’ll see below.

The thing is, people who fly drones don’t seem to be happy with this experiment. If you read the comments about the video below, the top rated ones are folks literally making fun of this test and saying it’s unnecessary.

As you can imagine, the conversation is heated on both sides but one thing’s for sure no matter how you look at it. Whatever side you’re on, you should know drones don’t belong near aircraft carrying hundreds of passengers. Actually, not even near a Cessna 172 with only the pilot in it.