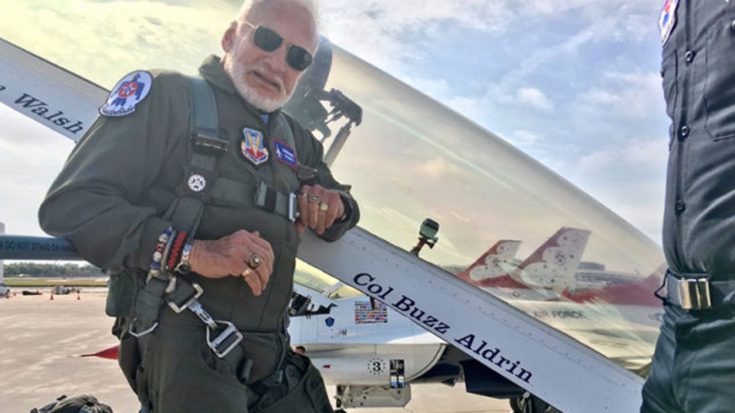 This Man Is Made Of Excellence.

Good ol’ Buzz Aldrin. We’re assuming almost all of you aviation fanatics know who he is, but for the few that might have been asleep since 1969, let us fill you in really quickly.

Born Edwin Eugene Aldrin Jr. in 1930 in New Jersey, this man got a full ride to MIT but opted to go to the United States Military Academy at West Point. He graduated third in his class with a mechanical engineering degree and became a fighter pilot and fought in Korea. He later got a Doctor of Science Degree from MIT.

FUN FACT: Aldrin was also the first to pee while on the moon’s surface.
Just sayin’.

As his career progressed, he was selected by NASA for the Gemini program and later landed on the moon alongside Neil Armstrong. His accolades can reach to the moon and back, but these are the most notable facts.

As for last week, he broke yet another barrier. He was the oldest person to fly with the United States Air Force Thunderbirds.

The short clip we found depicts his feelings of doing so and also the reactions of the pilots themselves. Apparently, they didn’t take it easy on him and they were getting close to 700 mph as they often do during airshows, but Buzz took it like a champ.

I mean, he reentered the atmosphere a few times so this would be considered a warm up even at his age.