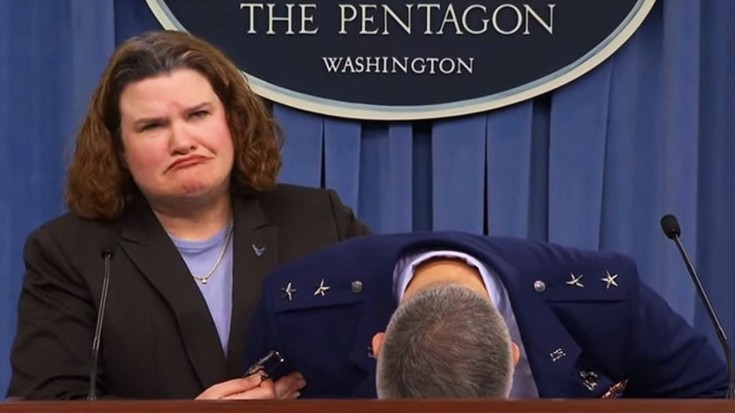 It Would Make Anyone Dizzy.

On February 10th, 2016, we’ve seen one of the biggest side effects of the F-35 program. It literally makes you dizzy just thinking about it.

During a budget talk at the Pentagon, Air Force Major General James F. Martin Jr. had a bit of a hard time talking about the plagued F-35 program. About to discuss the future of the F-35s, he slowly lowered his head to the surprise of Assistant Air Force Secretary Carolyn Gleason who was speaking right next to him.

Looking over and taken by surprise, she immediately grabbed the Major General as he fainted right next to her. All the other members of the briefing quickly responded and pulled up a chair for the unconscious Martin Sr. who was still trying to stand up and finish the talk.

He was then escorted out to collect himself.

“That’s what the F-35 would do to ya.”-Assistant Air Force Secretary Carolyn Gleason

Although a small joke, we’re still trying to decipher what Gleason meant by making her side comment.  Did she meant that the F-35 is so great it’ll make you pass out or the more obvious answer that it’s a disaster? We guess it’s for each individual’s interpretation. It occurs about 30 seconds into the video so keep an ear out for it.

All jokes aside, the General is well. The Air Force Times released a statement disclosing the Major General had a cold which caused his collapse. We’re thinking he was going over the math in his head though. Darn, ok, that was the last joke.