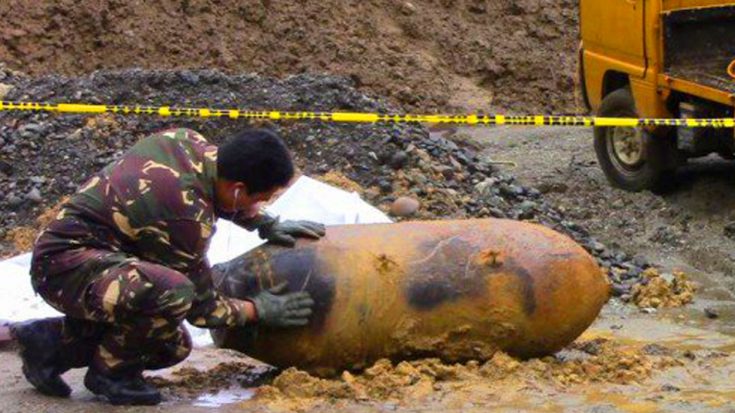 The Philippines saw some of the most intense combat of World War II. The island nation became the pivotal battleground between Japan and the United States as they fought for territory. Seven decades later the lasting effects of the second World War are still felt on the Philippines, especially with the discovery of a massive undetonated bomb.

The city of Surigao was caught completely off guard when a 500-pound WWII bomb was discovered under a local high school. This gigantic bomb was uncovered by a construction crew doing work on Surigao High School buried in soil 20 feet deep. The worker who discovered the bomb initially thought the discovery would make him rich but instead, it prompted the evacuation of over 1,000 locals.

“This type of bomb was used by Naval aircraft like the SBD and SB2C dive bombers and the TBM/TBF torpedo bomber. A bombing raid was conducted by such aircraft from carriers USS Essex and USS Lexington in Surigao City on September 9, 1944.”

It also was revealed that the location of Surigao High School was built on top of a former Japanese Army Base. The newly uncovered bomb is being transported to a safer location and an army bomb squad is currently planning a safe detonation.