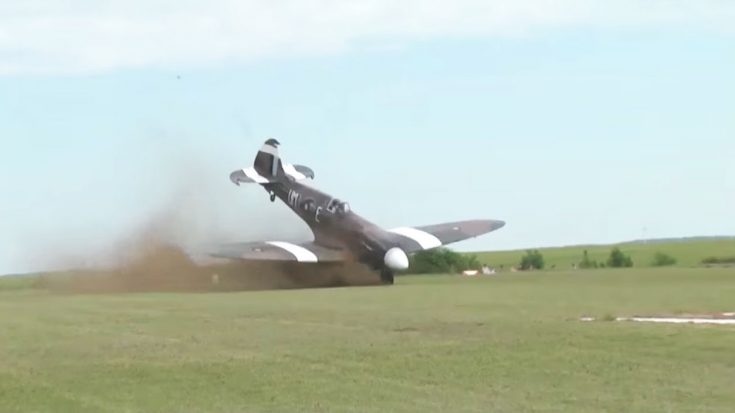 On June 11th, 2017, a Spitfire participating in a French airshow in L’aérodrome de Longuyon got into some nasty trouble.

Although there is no official report as to what happened because investigations of this type take some time, spectators did make lots of comments on what they saw. You can probably see some of the things they saw in the video as well.

The plane begins taking off from a grassy runway. Revving up, the nose dips down and strikes the prop against the ground. Since it was already going forward at significant speed, it flipped over trapping the pilot under the fuselage.

The aircrat was a Spifire XIX which first flew for the RAF in 1945.

Another report suggests that one of the spectators was hurt as well. In the video you can clearly see debris flying away from the plane, be it chunks of ground, rocks or even the prop. Apparently, some of it hit one of the people standing by.

Luckily, Cédric Ruet, the pilot of this unlucky Spitfire, got out of the cockpit without anything serious. Rescue workers and even many spectators immediately rushed to the wrecked plane to lift it up and free the trapped pilot.

We’ll update the story once an official report is out.