With No FAA, This Rc Fw190 And Corsair Shoot Rockets At Each Other 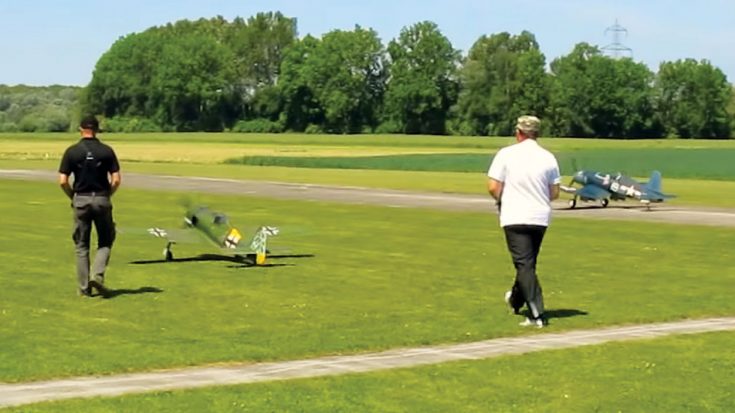 Safety First, But Then There’s Fun.

We’re not saying that the FAA is bad. They are after all protecting pilots, planes and people on the ground. The rules are there on purpose and so far they’ve probably saved countless lives. I mean, who would want some Rc fliers shooting mini rockets or fireworks at each other?

Well, to be frank, if you can do it in a safe way, why the hell not?

We’ve seen a ton of Rc planes over the many years we’ve been doing this. The Warbird ones are some of our favorites, as these modelers and pilots really take massive amounts of care in making them. A lot of them have Moki engines too, which produce about 250cc of power. They sound like mini radials (they actually are radials), and are just a pleasure to watch and hear.

We have to admit though, some of the best work we’ve seen comes out of places like Austria and Germany. We don’t know why, but like here, they do some really great flying. Listening to the announcer in this particular video, we deduce the airshow is taking place in Germany.

There, you can apparently strap rockets (probably fireworks of some kind) and go at it. Here, a Corsair is chasing the tail of an Fw 190. How cool is that?