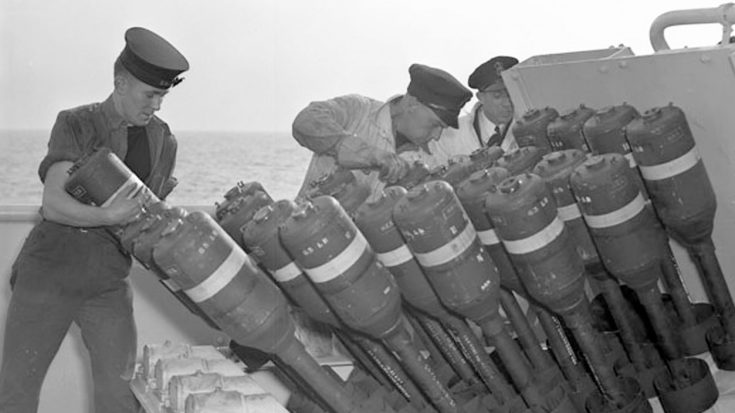 The German Kriegsmarine may have had fearsome battleships like the Bismarck and the Tirpitz but they were just toothless tigers, all for show and no results. The bigger threat from German’s navy were stealthy u-boats, launching sneak attacks on unsuspecting vessels. British Royal Navy used depth charges to combat the threat of U-boats but they were only mildly effective. To provide a more reliable submarine deterrent they used a rapid fire device called the Hedgehog to destroy hostile submarines.

The Hedgehog uses a mortar system to hurl 24 depth charges in front of the ship at enemy submarines. Traditional depth charges were more powerful than the Hedgehog’s mortars but far less accurate than each 30 lb explosive. Although 30 lbs of explosives may not seem like much, when you hurl 24 of them at once it is more than enough to pierce the hull of a U-boat.

“The hedgehog was a crude, 24-spigot mortar firing about 270 yds or 250 meters ahead of the attacking ship. It fired a circular salvo in the general area of the submarine, each missile containing 30 lbs of TNT or 35 lbs of Torpex. The missiles were contact fuzed, thus only detonating when hitting a submerged object, such as a submarine.”

Paired with the ship’s sonar the Hedgehog had an estimated success rate of 47 kills out of 268 attacks during WWII. Weaponology takes a look at how deadly the Hedgehog was in combat in this clip.