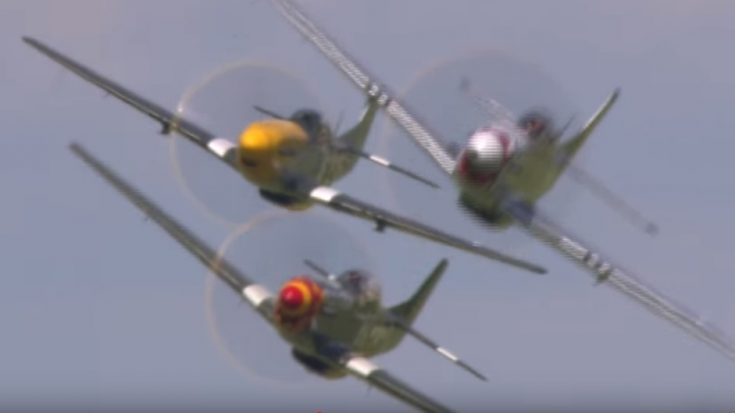 Here’s a video done right; sit back and turn the volume up because the sound on this tail chase is fantastic!

These P-51 Mustangs powered by the glorious Packard built Merlin engines were filmed at the Flying Legends Airshow at Duxford in the United Kingdom. Duxford has a rich history as an airfield in WWI, and as a fighter station for the RAF and the U.S. in WWII. The first squadron of Spitfires was based in Duxford.

Two of the Mustangs can be seen with the painting schemes of “Ferocious Frankie” and “Old Crow.”  Notably, “Old Crow” was the plane of Colonel Bud Anderson who became a triple ace while flying with the Yoxnard Boys in the 35th Fighter Group. The “Old Crow”, which got is name from the whisky of the same name, carried Anderson safely through 116 missions in Europe. At 96 years old, he is the leading living ace from WWII.

Sounds of the Merlin

This footage gets right up in there with close up shots from below, behind, and almost straight into the eyes of the pilots. How lucky are that they get to fly one of the most celebrated planes of WWII?

But the very best part is the sound. No cheesy music. No commentary. Just the sweet roar of the Merlin and the whistle over the gun ports.

Enjoy these 3 minutes and 23 seconds of goosebumps and chills!