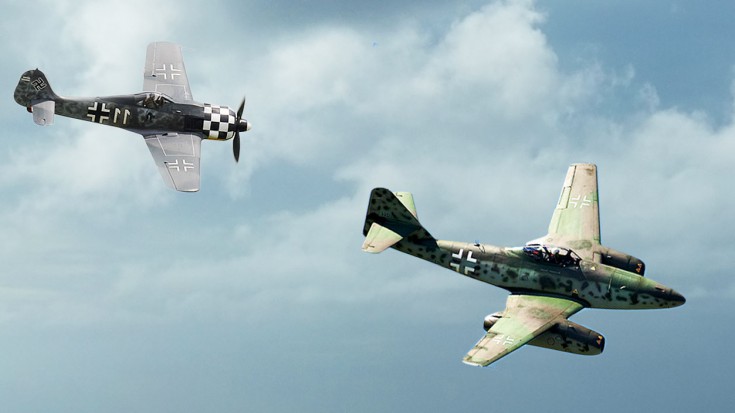 This Is Probably The Rarest Airshow Performance You’ll Ever See

In 2013, the Canadian Warplane Heritage Museum in Canada organized a very special event. Attending spectators were treated to a very rare air meet as they saw a Focke-Wulf Fw 190 take off right before and Messerschmitt Me 262. The Fw 190 is a well known and respected warbird, as they were used extensively by the Luftwaffe during World War II. Most people don’t even know of the existence of the Me 262, as they were introduced into combat during the last stages of the war and their production stopped when Nazi Germany lost the war.

Many early jets like the North American F-86 Sabre were modeled after captured Me 262s.

Although the Me 262s saw limited service during the war, they still managed to get over 500 Allied kills once in the air (higher numbers were claimed in some accounts.) About 150 miles per hour faster than any Allied plane, Nazi pilots definitely had an advantage when it came to outflying their opponents. When they first engaged Mustangs and Flying Fortresses, the pilots did not know what they were dealing with. Faster than anything they’ve ever seen, these pilots that were initially greeted by the Me 262s were in a ton trouble before new tactics were developed to deal with them.