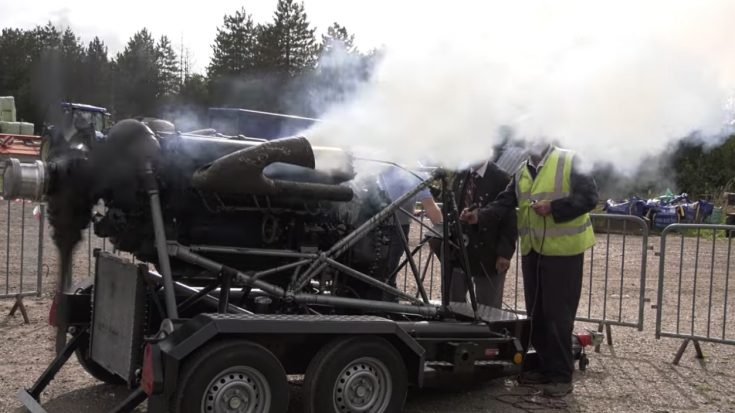 Wow, check this thing out! This Rolls Royce Merlin XX engine has quite a sound. And it has an equally amazing story to go along with it.

On July 28, 1943, the Handley Page Halifax bomber JD150 and its crew of seven were sent on a mission to bomb Hamburg. They came under an attack by a Me110. Sadly, the bomber was hit, burst into flames, and crashed into a field in Rendsburg, Germany. There were no survivors.

Then in 2010, a crew came to clear away the remnants of war from the very same field. Though the crew had since been laid to rest, the area contained unexploded bombs. But there was something else resting below the surface.

All four engines had sunk deep into the mud. Finally resurfaced, the four Merlin XX engines that powered the heavy bomber were offered up to the Wings Museum in Sussex, England.

Fast forward to 2018, one of those engines has been completely restored. It’s original down to its engine bearers and boy, does it look fantastic. The saxophone style exhausts will take anyone familiar with the MkII Handley Page Halifax bomber back in time with sounds they haven’t heard since 1943. And for anyone else who wasn’t there, it’s like nothing you’ve ever heard before.

The video below is from from the engine start-up event in 2018 at the Wings Museum. Halifax pilot George Dunn DFC opens the tribute to the crew of the Halifax JD150 by reading the story and names of the young crew members:

A number of former Bomber Command veterans were present for the moving event, which you can view in the video below. It’s a long one, but well worth the watch. The engine start begins around 4:15 (but we recommend the whole thing).