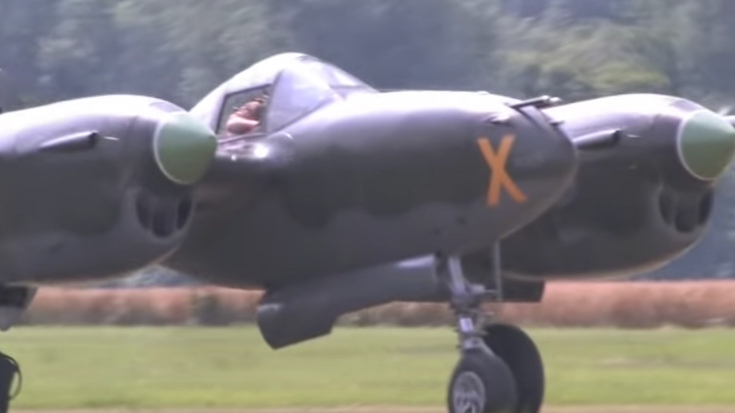 This Is A True Treat.

This awesome footage was captured at the Genesco Airshow back in 2014. Featuring two famous World War II planes, it was a really awesome sight to see. The P-38 Lightning named Ruff Stuff took off first, followed by the only airworthy Mosquito shortly there after. After that, it’s pure formation flying that’s one of a kind. Flying close together, the cameraman managed to capture the awesome sounds of both aircraft engines.

As of this writing, there is only one airworthy Mosquito in the world and is designated VR796/CF-HML.

This P-38 was built in 1945 but never saw action during the war. Sold privately, it was then used as a racer until 1945. Changing hands several times, she eventually ended up with Ron and Diane Fagen who restored her. While doing so, a World War II veteran by the name of Norbert Ruff stopped by often to look at the progress, telling them stories of the missions he flew in his P-38. After a while, the couple decided to name the plane after his experiences, so Ruff Stuff was born.

The Mosquito in this video is the only airworthy one in the world. Restored in 2014, it was flown by the skilled pilot Steve Hinton and was later deliver to her new owner Bob Jens who resides in Vancouver. The original aircraft flew 123 missions during the war and eventually crashed in Alberta in 1945.