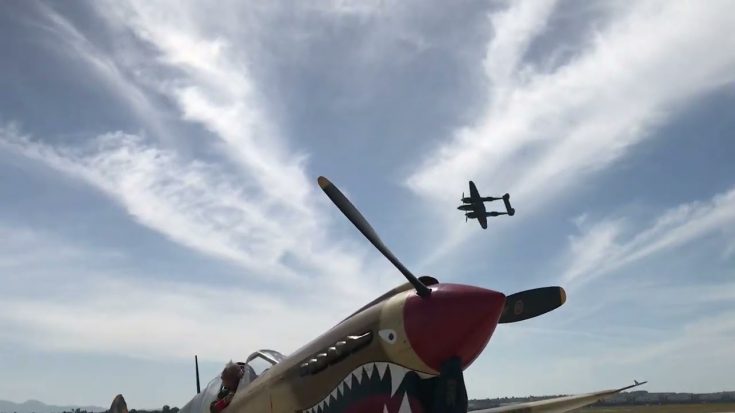 A rare P-38 Lightning was seen doing a low-pass with a couple of glorious explosions nearby much to the thrill of the spectators below.

P-38s have been one of the best US fighters during WWII. This legendary warbird is that it was originally designed as a bomber interceptor, and never intended as a fighter.

Along with its use as a general fighter, the P-38 was used in various aerial combat roles, including as a highly effective fighter-bomber, a night fighter, and a long-range escort fighter when equipped with drop tanks. The P-38 was also used as a bomber-pathfinder, guiding streams of medium and heavy bombers, or even other P-38s equipped with bombs, to their targets. Used in the aerial reconnaissance role, the P-38 accounted for 90 percent of the aerial film captured over Europe.

Not to mention, they’re also so much quicker than the Japanese Zeros, even with a single engine. Another interesting fact is that the P-38 shot down Japanese planes more than any other fighter in WWII.

The pilot in the video indeed did an awesome job doing a low-level fly-by. Enjoy!