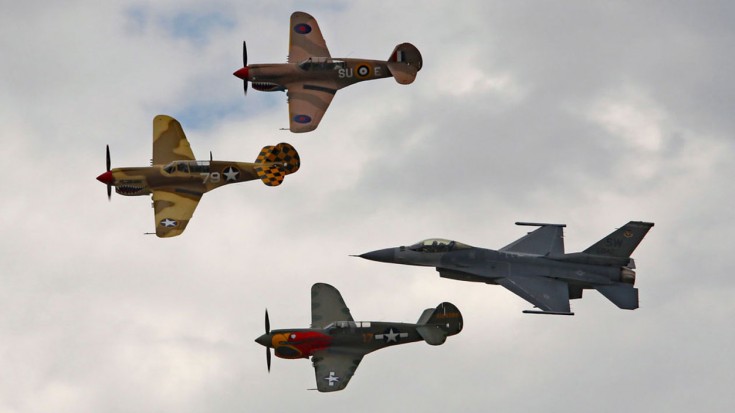 Every year the Planes of Fame Museum in Chino, California holds an annual air show to demonstrate the capabilities of aircraft old and new. For this year’s airshow Planes of Fame held a theme honoring the 75th anniversary of those who lost their lives in the attack on Pearl Harbor. The demonstration began with three P-40 Warhawks joined by an F-16 Viper flying in Missing Man Formation to pay tribute to those killed in the attack.

“The United States Air Force F-16 demonstration team from Shaw Air Force Base was on hand and filled out the modern day fighter portion of the show, with 2 flights on Friday. After each demonstration, the F-16 then joined up with historic aircraft for what is known as the Heritage flight, which differed from flight to flight.”

The following video displays the missing man formation from several vantage points recorded by different planes. Used in funerals and memorial events the missing man formation include four planes flying in a V-shape and one pulling up to represent the fallen pilot’s departure. The Planes of Fame Airshow featured nearly 50 vintage aircraft performing feats over 32,000 attendees which included several World War II veterans.