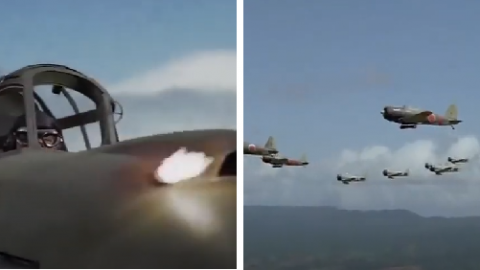 One Of The Very Best WWII Aviation Films Of All Time

“Tora! Tora! Tora!” wasn’t so well received by American audiences during its 1970 debut, but the film has since proven itself as a favorite of every true warbird fan. The balanced portrayal of the Japanese attack on Pearl Harbor is well-researched, detailed, and accurate. And of course, “Tora! Tora! Tora!” totally delivers when it comes to the dogfight scenes.

As is well known, Japanese Zeros were for the most part nowhere to be found after the War, except maybe in pieces. This was a bump in the road for any film looking to accurately show what dogfights were like in the Pacific. The Zero was kind of a big deal back then.

“Tora! Tora! Tora!” famously used painted T-6 Texans aircraft. What made this film stand out, however, was that they did such an excellent job at adapting the trainers. If you didn’t already know this fact, you might be fooled by the scene below.

But the best of all is always going to be the flying scenes. Newer films can use all the CGI and special effects they want, but scenes like the one shown below have that raw realness to them that is simply unbeatable. The engine sounds are so satisfying, perfectly capturing the intensity of the planes. The T-6 Texans seamlessly pretend to be Zeros. And the P-40s, whose appearances are based on the real-life actions of pilots George Welch and Ken Taylor, are a pleasure to behold. Yup, we’re all about it!