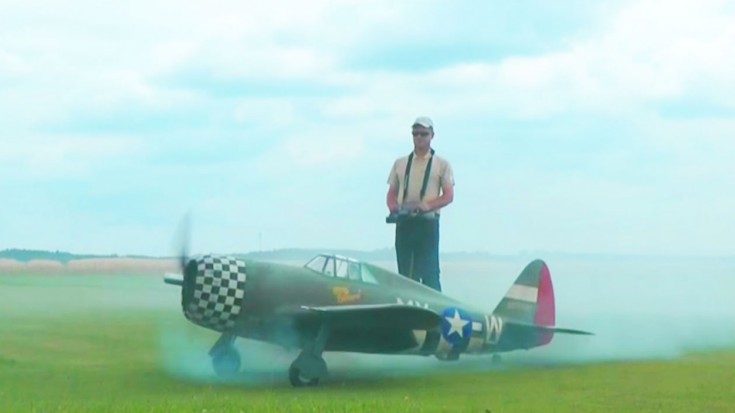 Adequately Named Miss Behave, This Warbird Makes Quite A Ruckus!

RC flying is the closest you can come to actually flying some of your favorite warbirds, so it’s no wonder these guys build some of the most epic World War II planes. This 1/4 scale P-47 Thunderbolt is equipped with the 400cc Moki engine giving it that awesome sound.

What’s more, she sounds even better in a dive. Named after a real warbird, Miss Behave was originally manufactured for the Untied States Air Force and was serialized as 42-26387. During the war, she was allocated to the 82nd Fighter Squadron, 78th Fighter Group in the UK.

The first set of canopies fixed onto the Thunderbolts were called ‘razorbacks,’ which were configured with a tall fuselage spine in the back. They severely limited the pilots visibility, and were later changed to a “bubble canopy.”

The bubble-top variants of the Thunderbolts included the P-47D-26, D-27, D-28 and D-30. This modification made the Thunderbolts even more deadly in the air, as the pilots could search for the enemy all around them. Combat fighters called the bubbletop variants ‘Superbolts,’ adequately describing their increased performance as both fighters and fighter-bombers.