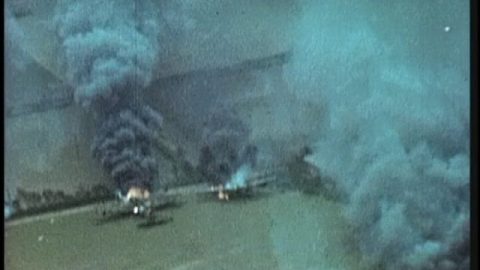 Captain Walter Flagg of the 8th Air Force can be seen performing multiple strafing runs on the Eggebek Aerodrome. The mission was done on April 13, 1945, while Flagg was assigned to the 63rd Fighter Squadron, 56th Fighter Group.

Flagg and his “Shoot!! You’re Faded/Darling Dottie” P-47 Thunderbolt were credited for destroying two enemy aircraft. He also flew two tours with the same Fighter Group while filling in roles from high-altitude escort to low-level interceptions.

In the end, he would finish flying 95 missions for a total of 387 hours. To cap it off, Flagg was awarded the Distinguished Flying Cross, Air Medal, Purple Heart, a Distinguished Unit Citation, and finally a European-African-Middle Eastern Campaign Medal – now that’s a legendary Air Force career!