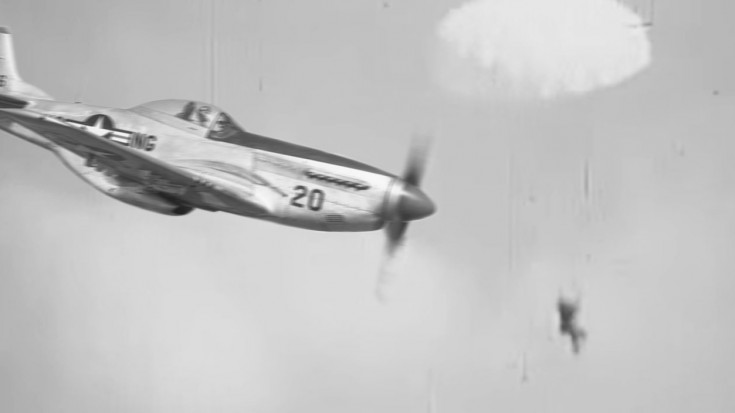 This Footage Will Show You The Intensity Of Air Combat

From what we’ve gathered, this footage was taken in 1945 over Japan. Sharpened and color collected, it shows some intense air battles and really drives home the intensity of what airmen on both sides of the war had to go through. The National Archives and Records Administration have this historical footage marked as being shot from P-51 Mustangs, although it’s not clear whether it’s just one pilot or a collection of different footage.

Mustangs were used to fight in North Africa, the Mediterranean and Italian Theaters and saw limited service in the Pacific Theater.

The clip shows a variety of combat shots. In a few, you’ll see pilots shooting down Japanese Zeros and bombers. In one quite fierce shot, a Zero is shot down and you’ll clearly see a the pilot bail out and deploy his parachute. Subsequently, the Allied pilot, though not shooting, flies right next to the downed pilot probably trying to tangle his parachute. Though not sanctioned by law of war and generally looked down upon, such incidents happened quite often as World War II was one of the most brutal modern wars we’ve ever seen.