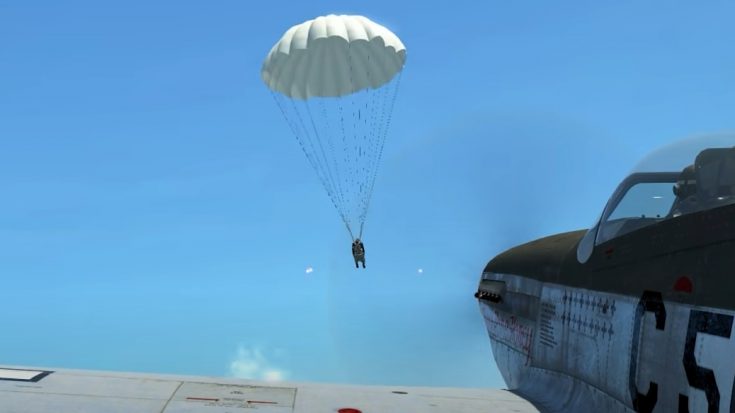 War has always been bloody. It’s filled with atrocious war crimes and unnecessary bloodshed. It is a tale as old as time. What you can see in the video is a German pilot committing war crimes against American crews parachuting to safety.

This way of “fighting”, if it can even be considered one, is widely considered inhumane by all sides of the war. According to the 1949 Geneva Convention, parachutists are to be considered “hors de combat”. This French term refers to people incapable of fighting or performing their combat duties during the war. Therefore, it is a war crime to kill them in cold blood.

However, it wasn’t all smooth-sailing for Richard during his missions. During one of his missions, he saw a German pilot operating a BF 109 mercilessly killing parachuting crews of the American Air Force. This kind of behavior, he thought, needed to be punished in the same merciless way.

It’s Not Always Black and White

Using his outstanding maneuvering skills, he managed to get behind the German plane and open-fired. He aimed to meticulously disable the aircraft’s system to force the German pilot to bail using a parachute. He then open-fired on the parachuting German with all 6 of his machine guns at 800 rounds per minute. Peterson was quoted saying, “He was minced meat by the time I got through with him.”.

These kinds of situations stretch every person’s definition of morality. If you were in his position, what would you have done?