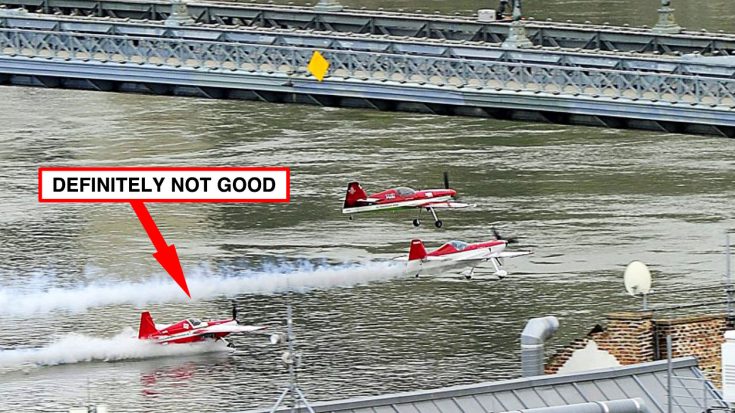 Talk About Ice In The Veins.

Earlier this year, in 2016, a group of pilots set out to break a Guinness World Record. They were to fly in a tight formation under the Chain Bridge in Budapest. Although they succeeded, the attempt almost ended in disaster. Almost being the operative word.

The stunt was being performed in May over the Dunabe River. Organized by Red Bull, this day was full of exciting events. From a full-sized airliner flying mere feet from over the top of the bridge to F-1 race cars showing off what they can do on the streets, people were plenty entertained. Until this happened.

The trio (all professional pilots of course) that was supposed to break the world record first gave the crowd a spectacular air show display. From formation loops to barrel rolls, they gae people some pretty amazing things to look at before they really turned things up.

As a finale, they were to fly in tight formation under the bridge, which they did. The problem was that one of them hit the water surface.

You folks are aviation fanatics. You know what that should have led to. But it didn’t.

The pilot recovered after skidding over the water, getting a nasty wobble after he gained altitude again. All in all, although it looked like a bad day, everything was good. They broke the world record and all three of them landed safely.

Like they say. Any landing you can walk away from is a good one. If you can use the same plane the next time, ever better.