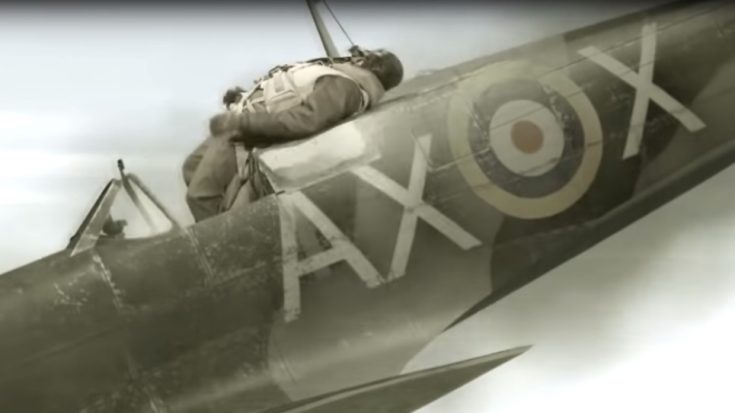 Dave Hastie, WWII pilot of the No.1 SAAF squadron, has got some tales. For starters, he once strangled a snake while flying his Spitfire. But that doesn’t even come close to his harrowing ride, not inside, but on top of, his diving Spitfire.

Dave Hastie had been out on a sortie above the Straits of Messina between Italy and Sicily in September, 1943, when he was involved in a tense dogfight. Pushing his Spitfire to full throttle, he hadn’t been handling it lightly. Suddenly, he felt a jerk. Flames licked at his feet and smoke billowed out. It was time to get out.

Bailing From a Spitfire

Fortunately for Hastie, he had just learned from an RAF wing commander the day before the most efficient way to bail a Spitfire:

But Hastie had forgotten step 2. After all, he’d only learned the day before. Poor Hastie got stuck on the lip of the canopy and the Spitfire was already nose down. Exhausted with a face full of overpowering wind, Hastie couldn’t pull himself up. He was counting himself as a statistic when he received a second life saving rush of energy. Feeling for the stick, he managed to give it a swift kick to bunt the Spitfire and launched himself free.

From there, he felt the sweet freedom of free falling before pulling his chute and getting picked up by a landing craft. Giving up his flying boots to the Navy men, he hitchhiked home in leather slippers. He reunited with his fellow pilots by 3pm the next day.

That was one lucky break for one fascinating veteran. See his interview below.