Pilots Show Off In Front Of Photographers Inside Death Valley 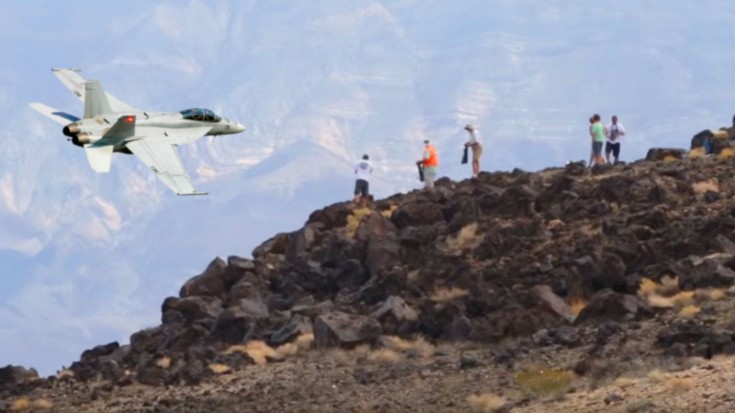 Next Time That’s Where I’m Camping!

When people go camping it’s typically for one reason; for peace and quiet. You might do some hiking, others some drinking, but the idea of being outdoors is to tune out life’s distractions and just relax. Having someone running a generator or other equipment is typically a buzzkill, but we just found an exception.

Last year, some lucky guys were doing a cross country trip and camped out in Death Valley, California. It’s a beautiful place to visit and do some exploring, which is why these guys were there. While hiking, the cameraman actually said he was just taking some videos of the scenery and some cool rock formations, but then he got a surprise of a lifetime.

At the beginning of the video the cameraman’s reaction is beyond priceless!

While there, what they didn’t know is that Edwards Air Force base was just around the corner. Death Valley is typically used by pilots as training grounds for low level mountain flying which they would typically encounter in places like Afghanistan for example. They fly low, they fly fast and right between canyon walls making this a treat most people don’t get to experience in their lifetime.

Out of nowhere, a bunch of F/A-18 Hornets appear and buzz these guys. As you’ll hear from their reactions, they absolutely loved it and you can’t blame them. One guy screams in excitement as more and more of these jets fly by.

Their cross country road trip just got better that’s for sure!