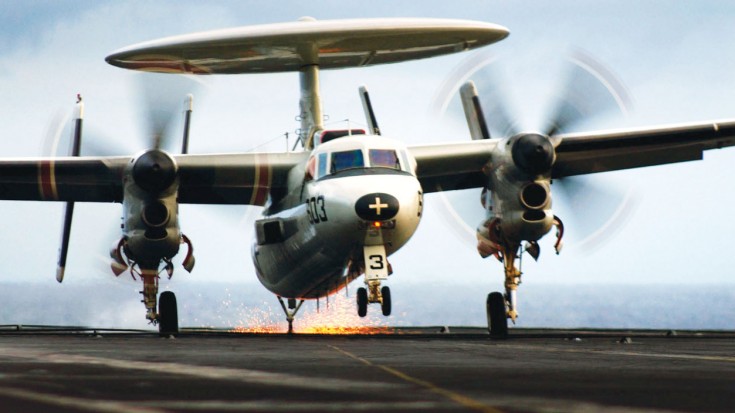 For 5 Seconds You Think They’re Goners.

Every aviator knows that landing on a carrier is one of the toughest jobs on the planet. By the same token, every man on deck knows that they’re working on one of the most hazardous places on the planet too. On March 18th, 2016, we saw both sides of what happens when things go wrong.

As you’ll see, an E-2C Hawkeye hit the deck, snagging cable #4. According to the plane’s crew, everything “felt and sounded good” when all of the sudden there was a loud bang. The pilot was still going full throttle (as per training) and kept on going. With a prop plane however, such declaration is dangerous, as there was little room to take off again.

Navy investigators found that the new procedures in fixing cable problems lacked warning and were not “user friendly.”

As you’ll see, there were a few moments of intense waiting. The plane disappeared under the deck for 4 whole seconds. At first glance, you’ll think they were done for. After that (what seems like eternity) the Hawkeye reappeared, steadily climbing to safety. The crew then flew over to a nearby base for landing.

The broken cable however, took some casualties on the deck. Eight crew members were hit by the whipping steel cable, one of them suffering a possible brain injury while others suffered broke leg bones.

The cable system which broke was showing an error code before the landing. The maintenance team which was sent to fix it was faced with a new procedure that needed to be followed. They were not deemed responsible as it was not their direct neglect that caused the incident, but poorly written instructions with a lack of supervisory oversight.