Polar Blast- Here’s How To De-Ice A Plane 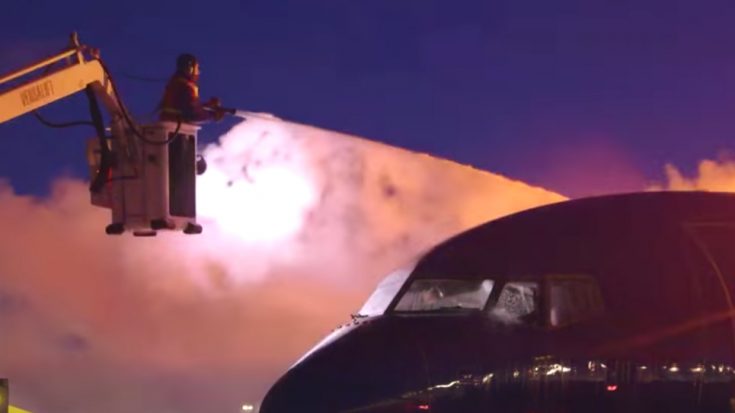 As the Polar Vortex hits the midwest with mind-boggling negative temperatures, the Iceman is in high demand. Spraying down planes with colorful liquids, the man in the bucket is absolutely key in keeping  planes, passengers, crew, and cargo safe.

Ice buildup on planes can be catastrophic. In fact, icing  has been a contributing factor in roughly 9.5% of fatal air carrier accidents. Yikes!

The tiniest reshaping of a plane’s surface can alter its aerodynamics. When planes sit too long in the elements, ice particles build up and do just that.

But never fear, lots of smart people have figured out how to deal with this.

Before a plane takes to the sky, the Iceman truck and bucket will get as close as possible to the plane. They then spray a de-icing fluid that consists of propylene glycol.

1. melt and remove any contamination and

2. lower the freezing point of water.

This allows planes to take off safely.

What about when the plane is flying? Inflight de-icing equipment handles the edges of the wings, propellers, and sometimes the tail. The windshield and pilot tubes are also heated.

Jet fuel freezes at -40 degrees Fahrenheit, but with the crew members monitoring the the engine-heated fuel temperatures during flight, it’s not typically an issue.

In addition to the de-icing spray, jet wings are heated with bleed air from the engine and the plane’s speed keeps snow from accumulated.

So it’s incredibly important that the planes get the proper care while they are still on the ground. If you’ll be traveling in cold weather and see one of these Icemen, be sure to give them a wave for keeping you safe!

Check the video below to learn what the Icemen want you to know about their important job.