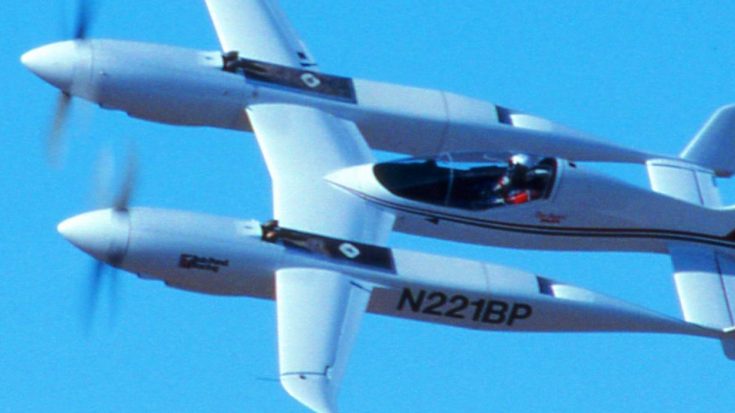 A P-51 Mustang recently beat the world speed record for a piston engine aircraft, reaching 555 mph. This air racer named Voodoo was flown by Steve Hinton Jr, who’s been racing for decades. Because we started digging into air racing (and we do understand that some warbird purists are totally against “degrading” these planes by turning them into racers), we came across an alternative solution from the 90s.

Scaled Composites, an aerospace company run by designer Burt Rutan, is known for making unusual looking and flying aircraft. If you’re interested in experimental aircraft that achieved some great feats including flying around the world without being refueled, check this company out. They’re also the ones responsible for this here Pond Racer (Model 158).

Robert Pond, a World War II naval aviator and later vintage aircraft collector, helped design this plane as an alternative to racing vintage warbirds which were being crashed or damaged due to accidents and overexerting the airframes. For this reason, he and Rutan came up with this twin-engine, twin-boom racer.

Reaching 400 mph during qualifying rounds and trying to join the unlimited class at Reno Races, the Pond Racer won second place in one of the events in 1992 but showed signs of trouble. From oil leaks, composite parts overheating and melting to many other problems, the crew that worked on the racer tried qualifying it again the following year after figuring out some of the problems.

Rick Brickert, an experienced pilot who qualified the aircraft the year before, tried it again in September of 1993. During the flight, one of the engines suffered a catastrophic failure and Brickett tried belly landing. He overshot his intended spot however and crashed, losing his life in the process.

This was the one and only example of the Pond Racer and no further work was done on it since the crash.

Here’s a video of how the plane flew and sounded.

Also, we found a video of Rick talking about the Pond Racer and the “Missing Man Formation” his friends flew after his passing.