Just 10 Years After WWII, The Most Aerodynamic Seaplane Ever Was Created 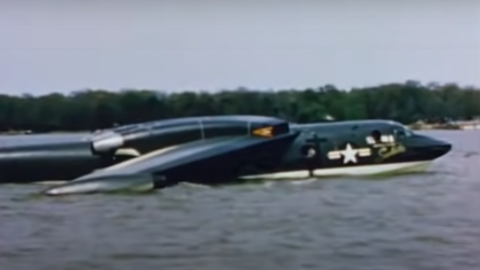 World War II gave aviation a magnificent boost when it came to innovation. From the designs themselves to armament, planes definitely went through many changes. The end of the war however, marked yet another milestone, namely, the jet age.

One of these planes was the P-6 SeaMaster.

Fun Fact: Only 12 of these planes were built.

The video below will tell you a lot about the actual plane, so we’ll let it do the talking. We will however, give you some background on its development.

Immediately after the war, global tensions were great and the need for a new strategic nuclear-capable bomber was needed. Since the Air Force was created, the Navy saw massive budget cuts but wanted to stay relevant in the air. For this reason, they called for a “Seaplane Striking Force.”

Accepted and given the budget, Martin built the first prototypes. Over the next few years, they fought constant problems with water takeoff including spray injestion and overall control, losing a few of them in the process.

In the end, although a good concept, the Navy had better luck with nuclear strikes delivered by submarines and ICBMs rather than using planes. For this reason, all remaining prototypes were scrapped and none exist today.