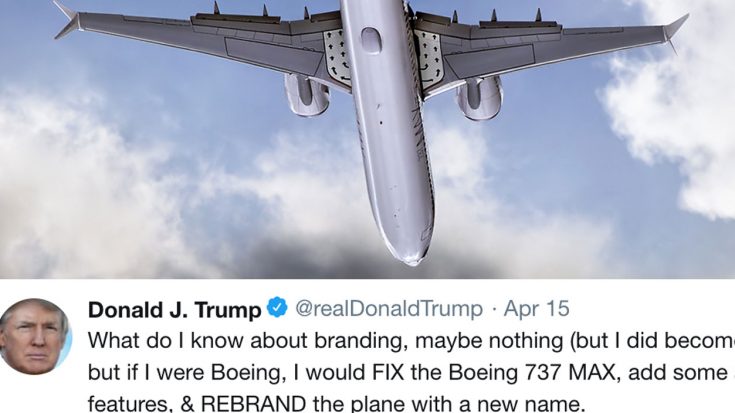 Boeing has been in the public spotlight in the past few months and not in a good way. Right after rolling out their most advanced and fuel-efficient plane, the 737 Max 8, two crashes within months have called the aircraft’s safety into question.

There are millions of questions regarding those incidents. Why did it only happen in third-world countries? Was training an issue? Is the AoA sensor faulty? The list goes on and on.

Boeing and local authorities where the planes crashed will take months if not longer to get to the root of the problem, but it seems like President Trump already has the answer.

What do I know about branding, maybe nothing (but I did become President!), but if I were Boeing, I would FIX the Boeing 737 MAX, add some additional great features, & REBRAND the plane with a new name.
No product has suffered like this one. But again, what the hell do I know?

Now, we get the point, but telling a company that spent years and millions of dollars for top of the line engineers to simply “fix it and add new features” seems a bit simplistic. Many other people agree. You can see that in the comments we picked out below, of which there were over 40,000.

First they should *FIX* the plane, and make it *BETTER* somehow too?

Genius. Why didn't they think of that?

Fix the Boeing 737 MAX! What a profound idea! I'm sure no one at @BoeingAirplanes ever thought of that!

Good one indeed. I think it could absolutely work.

Lol, NO product has suffered?

Everything you put your name on has suffered BIGLY:

It's almost as if your name is poison.

At the end of the day, Boeing, as much as we love the company, needs to get to the root of the problem, whatever it is. The company that brought us everything from the B-17 Flying Fortress to the F-18 Hornet seems to be slipping in the face of competition, but we’re sure they’ll fix the problem and make these aircraft the best they can be.