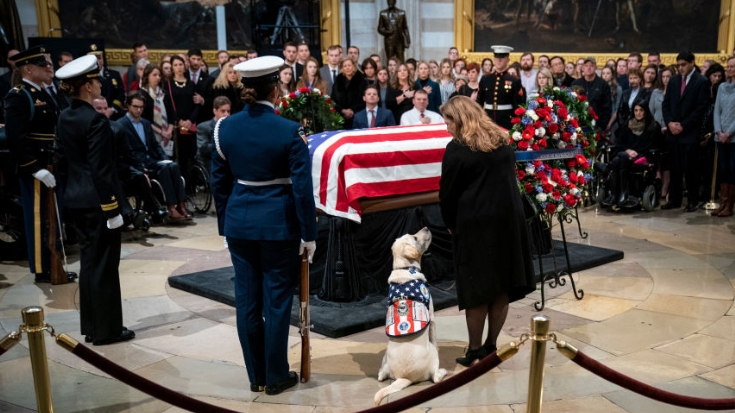 Last week, President George H. W. Bush passed away at age 94 due to complications with vascular Parkinsonism, leaving behind a legacy as WWII pilot and a leader who worked with both sides of the political spectrum. Countless people paid their respects to President Bush at the Capitol rotunda, but there was one special tribute.

In his final years, President Bush acquired a service dog “Sully”. He named after pilot Chesley “Sully” Sullenberger, who saved the lives of hundreds during the Hudson River crash in 2009.

Sully became President Bush’s specially-trained service dog following the death of Barbara Bush last June. He is a part of the VetDogs program assisting army veterans with tasks and emotional support. The two became fast friends but sadly were together for only a short time.

“As much as our family is going to miss this dog, we’re comforted to know he’ll bring the same joy to his new home as he did to 41.”

Sully joined President Bush’s final farewell at the Capitol Rotunda and bowed his head in respect to his fallen friend. Thanks for making the President’s last few months much easier.