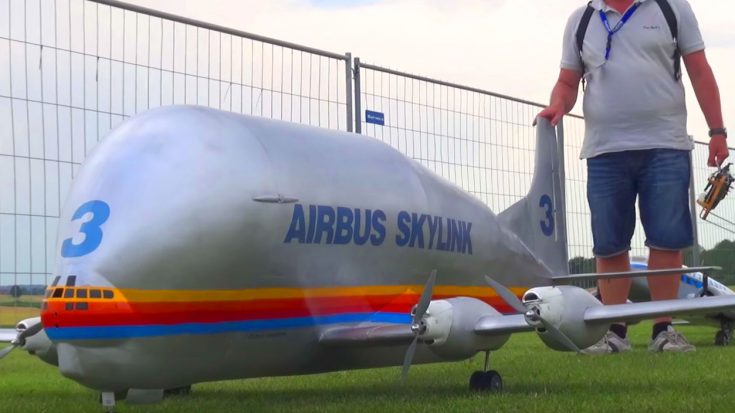 Shuttles in the United States Space Program are pretty big, so it takes an even bigger plane to transport them around. This is where the Aero Spacelines Super Guppy comes into play, NASA’s huge cargo plane. The Super Guppy is actually a modified C-97 Stratofrieghter with a ballooned ceiling which allows it to accommodate immense cargo.

“The Guppy is an amazing aircraft that’s been involved in nearly every part of the human space exploration in NASA’s history. From the Saturn rocket boosters in the 60s, it has moved parts Apollo, Hubble Telescope, the skylab. A lot of people don’t realize what it’s done in our national history.”

Like most iconic planes the Super Guppy eventually got the treatment as an RC plane. It was an odd choice for an RC because of its size and the fact that is isn’t the most aerodynamic plane around.

At the 2017 Airliner Meeting, one pilot found out the hard way that the Super Guppy isn’t as agile as he had hoped. It turns out the Guppy’s center of gravity isn’t well suited for taking sudden gusts of wind. All that work put into building this RC model and then it all comes crashing down in an instant.