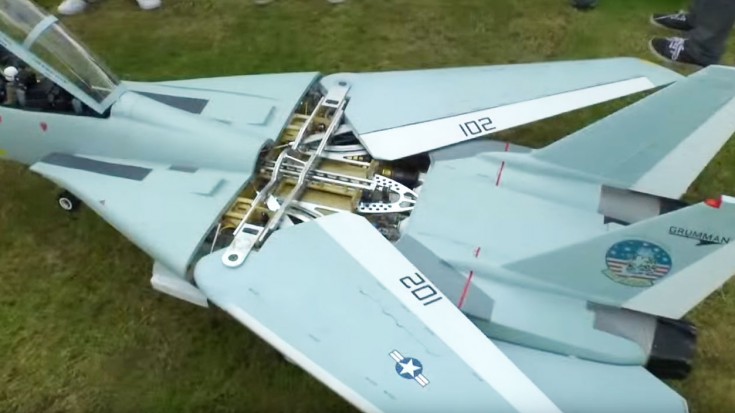 It’s Crazy What These Guys Can Do.

All of you love World War II planes but we’ve gathered that most of you simply love aviation in general. Whether it be Jugs or Lightnings, Eagles or Galaxies, a great plane is a great plane.

Same goes for remote controlled planes as well. We’d never show you some boring small scale model. We strive to bring you the best things out there, so here’s a crazy Tomcat model.

The video is slightly long, so here are some notable moments if you’d like to skip around:

We’ve seen a lot of F-14 RCs on the internet, but none were as true to form as this one. The trickiest thing about a Tomcat as you can imagine are the wings. As they were designed with variable-sweep wings, they were meant to give the pilot the option to select the best wing configuration possible for the speed the aircraft is flying. With that of course, came a whole new set mechanisms.

Rudolf Winter, the mastermind behind this F-14, wanted to make his Rc to be as real as possible. For this reason, he engineered it to have the wings be functional and actually sweep back during flight. I

t’s actually really impressive to see that on a model. Watch this to see for yourself.