Refueling An HH-60 Is Harder Than You Think 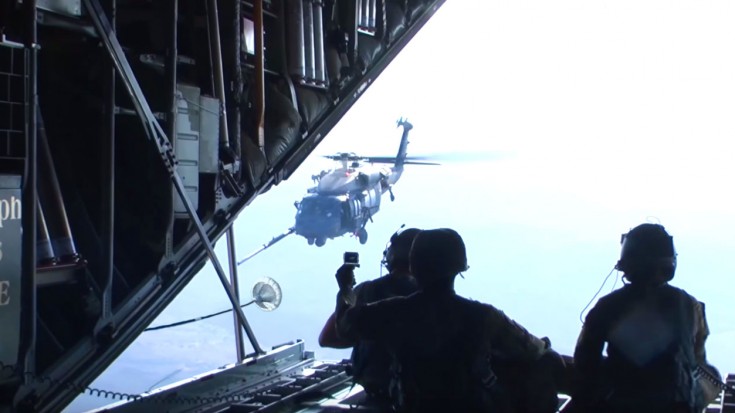 Now Imagine If You Were Low On Fuel.

This awesome video comes to us form the Daily Military Defense & Archive channel on Youtube. They curate some really great videos that are taken by soldiers on duty, so you get to see some inner workings and behind the scenes footage you’d otherwise never be able to see.

The cool shots you want to see start about 2:00 minutes in when the tanker is in the air and the boys are starting to work!

This video shows what would seem like a simple training session. Captured from onboard an HC-130P tanker, the training exercise was for HH-60 pilots to use the probe-and-drouge system to refuel their choppers.

That might seem like an easy task, but the choppers were facing some strong winds as could be expected so they were whipping to and fro. Nailing that little funnel that’s also going crazy in the air is quite hard, but they managed to do it.

This is why these guys practice this stuff day in and day out though. When you’re in combat and low on fuel, nothing will shake you and you’ll do what you have to and you’ll do it well.

Thanks to all the soldiers that are working hard everyday to make this happen.