Remember How The “Mynarski Lancaster” Got Its Name? 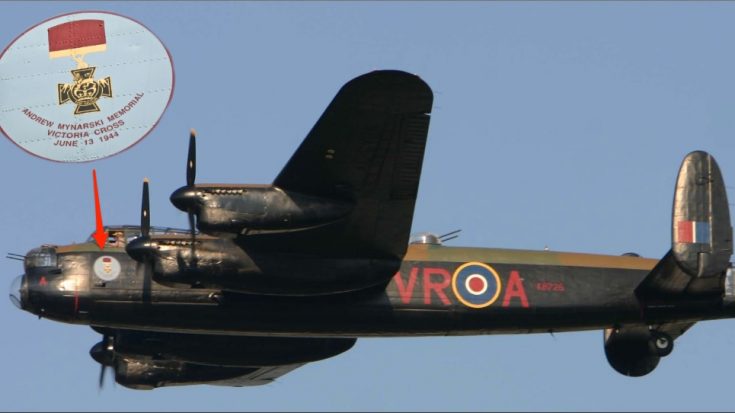 Trapped In A Flaming Turret

On Tuesday, June 13, 1944, just a day after D-Day, KB726 was on a raid in Northern France. Suddenly, it was attacked by a Junkers Ju 88 night fighter. Badly damaged on the port engines and centre fuselage, the Lancaster burst into flame and the crew was ordered to bail out.

But not all of them could.

Tail gunner Pat Brophy had been trapped in the turret. Pilot Officer Andrew Mynarski saw this and, without hesitation, forced his way through the flames to help him. Unfortunately, it was no use. The turret did not budge despite the 27 year old Mynarski beating it with both his fire axe and his hands.

Mynarsky left Brophy only when the gunner waved him away. Parachute and flight suit on fire, he paused to salute Brophy and say, “Good night, sir,” and jumped.

He landed heavily, thanks to his badly burned parachute. Taken to a German hospital, he sadly did not survive his burns.

However, despite the odds, Brophy did. The bomber crashed in a farm field with him still inside of it, but the impact shot him out of the turret and into a tree where he was momentarily knocked out.

Brophy then joined French Resistance fighters and continued to fight behind enemy lines until returning to London in September 1944. Only then did he learn of Mynarksi’s fate.

Once the surviving crew knew the whole story, de Breyne, KB726’s pilot, pushed for Mynarski to be recognized. On October 11, 1946, Mynarski was posthumously awarded the Victoria Cross, the highest award in the British honor system.

A junior high school, a park, a Royal Canadian Legion, an Air Cadet squadron, and three lakes all bear Mynarski’s name. Several statues of him also exist. But the greatest honor of them all is the Avro Lancaster on the Canadian Warplane Heritage Museum in Hamilton, Ontario that has been named “Mynarski’s Memorial Lancaster.” It is one of just two airworthy Lancasters today.

See the clip below by Heritage Minutes for a moving dramatization of Andrew Mynarski’s heroic deed.