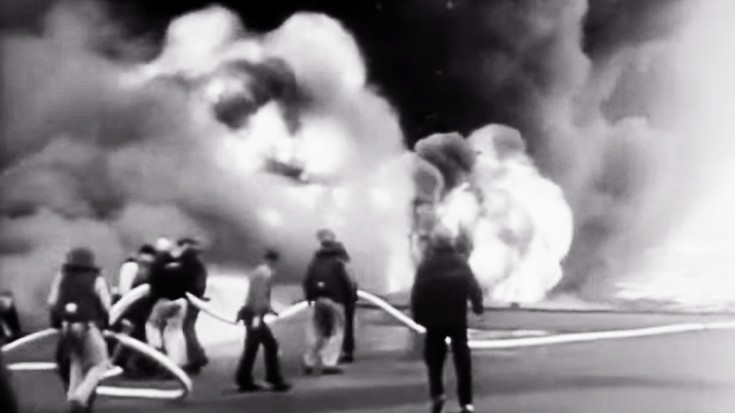 FootageArchive - Videos From The Past

Yet More Proof Why The Greatest Generation Is Called Just That.

This is some simply fantastic, and emotional, footage that has been remastered and for the most part is crystal clear. The event was captured from every angle as there were camera crews on the ship as well as on others that came in for support, so you can really see both the chaos created but also the men working hard to save others and keep the carrier operable.

The entire incident started on March 19th, 1945. U.S.S. Franklin became the closest carrier to ever come to the Japanese shoreline, just 50 miles away. Because of that, it was a major threat to the Japanese and a highly valued target.

U.S.S. Franklin became the most heavily damaged U.S. vessel to still return to her home base during World War II.

With the crew at the ready at all hours of the day, all was calm until a Japanese dive bomber broke through the cloud cover and dropped two 500 lb. bombs. One struck the flight deck square in the middle while the other hit aft plowing through two decks.

The damage from the bombs was severe, however, the crew was getting ready for another attack at the time. With 31 planes on the flight deck armed and fueled and additional planes on the hangar deck, the ship caught massive fire and started billowing.

What you’ll see in this video is the actions taken by the brave crew that saved her. It was an extremely rough day, however, Franklin managed to get back home 12,000 miles away despite her damage.