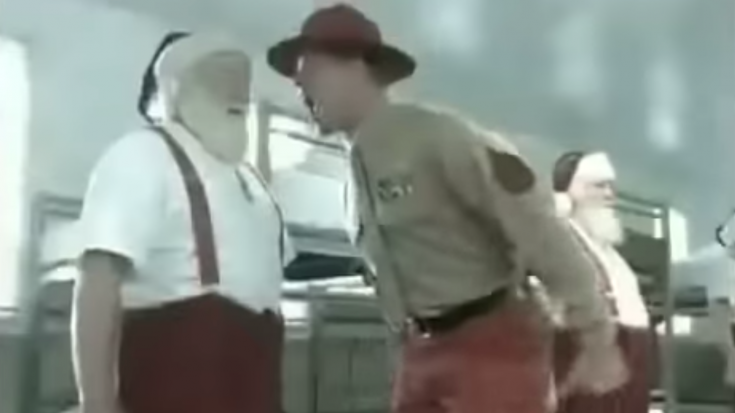 You didn’t think Santa could possibly make his way around the entire world on some rinky-dink reindeer sleigh, facing bitter cold, squeezing through all those chimneys, without some basic training, did you?

You thought that the portly gentleman bouncing babies on his lap at the mall was simply a measly civilian volunteer.  But no. Those rosy cheeks are about to command a lot more respect from you.

Every year, the countdown to Christmas begins. And every year, a bunch of rag-tag hopefuls embark on a program to beat the odds and transform into REAL Santas. Some are fat. Some are old. Most are both.

To prepare for Christmas cheer, the Santas must learn how to withstand the elements. They must pass through snowstorm simulations. They tread through ice water in their heavy Santa suits. They are introduced to the concept of a reindeer. Chimneys prove to be a challenging obstacle. But most grueling of all is the training for the children to sit on Santa’s lap. It’s a real test of character. The drill sergeants push the Santas to the limit, teasing them and grabbing their sagging chests.

When asked how he liked the kids, one Santa trainee said, “I could take ’em or leave ’em. You know, it’s kinda…” Christmas, after all, is not really about the children. Christmas is about efficiency and discipline. And only a boot camp of this caliber could produce the kind of Santas who are up for the task.

Watch the video for an inside look into Santa Boot Camp!