Savage Power Of The Atomic Cannon 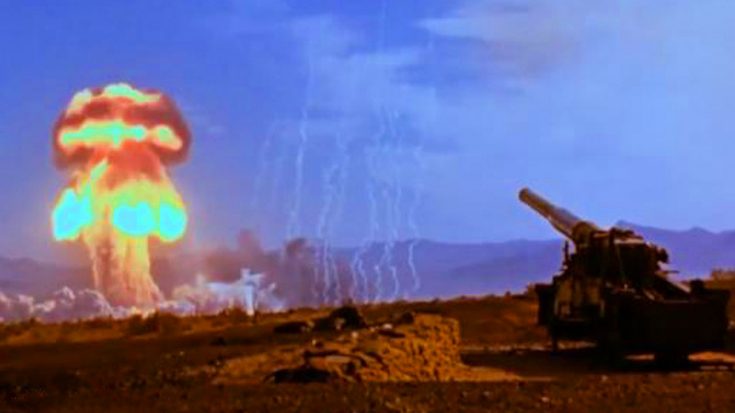 In the early 1950s, the Cold War was in full swing and the world was consumed by the paranoia of a nuclear strike. Children were told to duck and cover under their desks, neighborhood families were building fallout shelters and the United States military was dead set on beating out the Soviet Union in the nuclear arms race. Huge bomber planes were the norm when it came to delivering nuclear payloads, so they sought an alternative and created the M65 Atomic Cannon for the US Army.

The M65 Atomic Cannon nicknamed Atomic Annie was a massive gun capable of firing nuclear payloads over a distance of 20 miles. Designed by Robert Schwartz, the cannon was based on German railroad guns but converted into a towed artillery weapon rather than mounted on trains.

“The weight of the gun and carriage was 94,000 lbs/42,582 kg, (47 tons). The length of the gun carriage was 38′-5″ or 11.71 meters. The gun could be emplaced and set up for firing in approximately 12 minutes and returned to the traveling mode in approximately 15 minutes. The publicly-acknowledged maximum range of the 280mm gun was 20 miles, hitting within 20 yards or less of the desired target.”

Atomic Annie was stationed in South Korea as a deterrent for the spread of communism but it was never actually fired. But on the morning of May 25th, 1953 the M65 Atomic Cannon was fired before a film crew here is that clip.