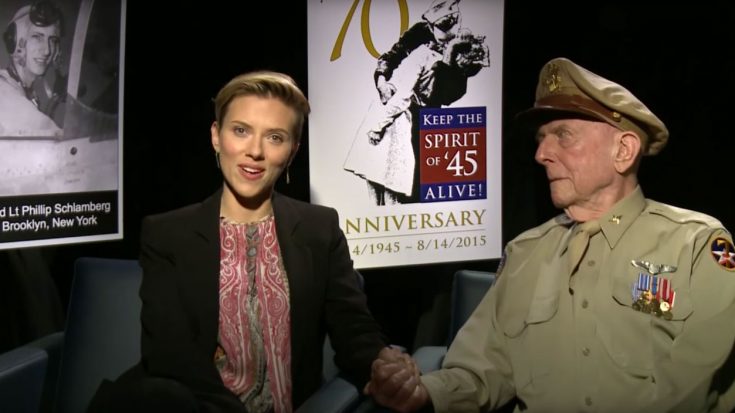 The Spirit Lives On.

Captain Jerry Yellin’s career while serving in the U.S. Army Air Corps during World War II will go down in history. He flew 19 combat missions over Iwo Jima including the final battle on August 14th, 1945. During that final mission, Captain Yellin lost a close friend named Phil Schlamberg. Devastated by the loss, he reached out to Schlamberg’s older brother Michael and became a close family friend. Yellin remained a close family friend as Michael’s daughter married a Dutch architect and had a daughter, Scarlett Johansson. Now she has come forward as an ambassador to the Spirit of 45 initiative to support Captain Yellin.

“We are rapidly disappearing. With our legacy, we must live on so we can inspire future generations of Americans.”

Scarlett Johansson has granted Yellin’s wish to preserve the legacy of the Greatest Generation to inspire Americans and establish a day of remembrance beginning on August 14, 2016. As more and more WWII veterans pass away we must know their stories and the sacrifices they made to keep the world safe from evil. Now more than ever it is crucial to honor our veterans and most of all to keep the spirit of 45 alive.