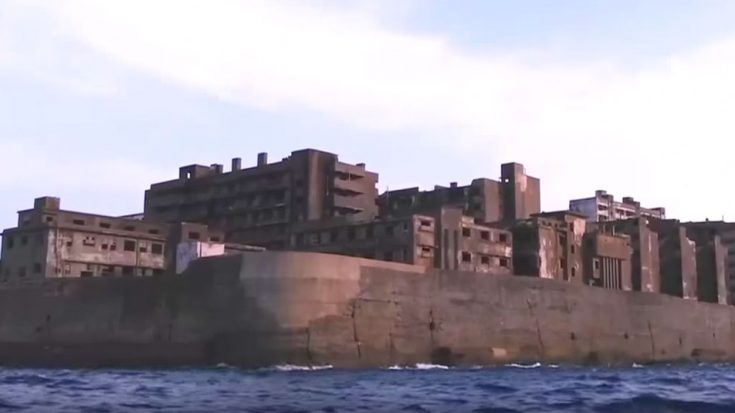 Nine miles off the coast of Nagasaki there lies an island, unlike other islands. Today Hashima Island is a tourist destination dedicated to showcasing Japan’s industrial revolution. But it wasn’t always a place where sightseers could spend a day, it had a very dark and twisted past during WWII.

Hashima Island was a manmade landmass built in 1890 by the Mitsubishi Corporation and was considered the city of the future as Japan entered its industrial revolution. Featuring the first concrete apartment buildings the island was surrounded by reinforced walls and resembled a battleship when viewed from the sea. The island was built atop an undersea coal mine where workers could live comfortable lives while working for Mitsubishi. But what many people don’t know is the tarnished past of Hashima Island as a slave labor camp.

During WWII prisoners from China and Korea were brought to Hashima Island as forced laborers. These laborers were forced to work in the coal mines almost a mile underground for over 12 hours per day without proper food or water rations. Conditions like these were reminiscent of concentration camps from Nazi Germany. Many of the survivors speak of attempting suicide because of how horrible their lives were in forced labor conditions.

“It is unacceptable that the site of forced labor for Koreans and Chinese is regarded as a historic relic of impressive industrial growth.”

The people of Korea demanded that Japan acknowledge Hashima Island’s past and they did eventually apologize. However, the Japanese Government made no mention of Korean laborers which is still causing tensions over the site. Considering Japan’s past of glancing over war crimes, Unit 731 and Korean comfort women it doesn’t seem likely they will push adjust their views on this site.

What are your thoughts on this site? Was Japan’s apology not enough or it time they admitted more. This video from Arirang Issue goes deeper into the History of Hashima Island and even interviews forced laborers who served there over 70 years ago.