Skydiver Leaps Out Of T-6 Texan 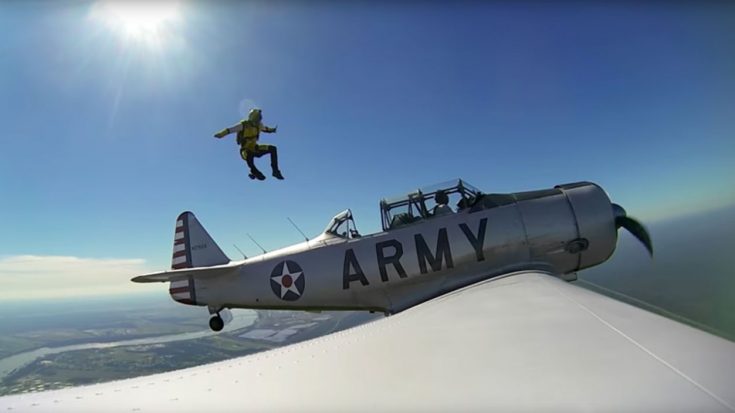 The T-6 Texan is a Warbird that a tendency to be overlooked while other WWII planes get more attention. Not suited for combat the Texan found a niche as a training plane for pilots during World War II. Reaching maximum speeds of 208 mph and armed with only one machine gun most pilots started off in the Texan before transitioning to combat-ready warbirds. Despite being a training plane the T-6 remained in service for 60 years and continues to impress audiences at air shows. The greatest strength of the T-6 is that it is a reliable plane and many pilots swear by it as the best-built plane around.

“The T-6’s endurance comes down to the numbers. Like most World War II aircraft, the T-6 was built in vast quantities. A little more than 17,000 were built by North American Aviation and its overseas licensees. But what distinguished the T-6 then is what keeps it alive now: It was over-engineered, yet easy to maintain—and it didn’t become obsolete for a very long time.”

Sure, there are more powerful planes in the sky but the T-6 Texan still gets the job done. The Texan still serves as a plane to get new pilots off the ground and continues to impress the crowds with stunts like the zero-g skydive you can see here.