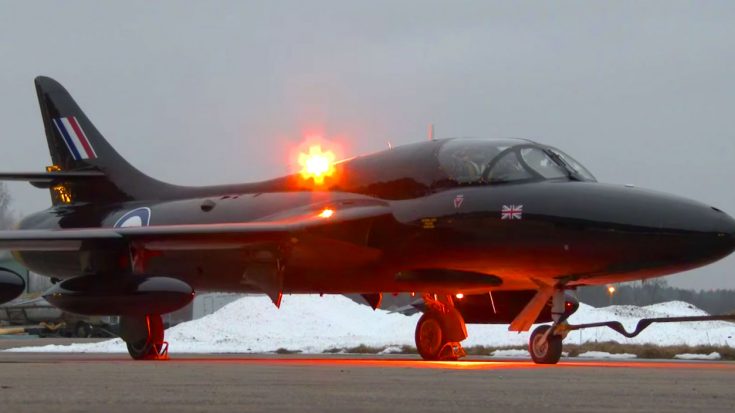 Thrill Of The Hunter.

The Hawker Hunter is a majestic, powerful jet and the pride of the Royal Air Force during the early days of the Jet Age. Introduced 1954 the Hawker Hunter quickly rose to power in the early 1950s and operated for 60 years before being retired from combat service. The Hunter may be enjoying retirement from fighting, but you can see here that they still ready to soar.

After WWII the Royal Air Force was looking to replace the Gloster Meteor with a more suitable jet. The result was what many to consider to be the RAF’s first multi-role jet, Mk-58 Hawker Hunter. Almost 2,000 of these jets were produced, serving as roles as fighters, bombers, ground attack aircraft and reconnaissance.

“If greatness in a combat airplane equates with outstanding service longevity and extreme operational flexibility the Hunter is indeed truly great and one of the classic fighter designs of all time. It is aesthetically beautiful and a thoroughbred aircraft in every sense. This was almost to be expected, given that it’s design was penned by Sir Sydney Camm who’s other major masterpieces included the Hurricane and the Harrier.”

Filmmaker Jesper Rådegård was lucky enough to witness this beautiful jet at Hässlö Air Base in Sweden. This jet black Hawker Hunter still shines even on a cold overcast day. On a cold day like this why would you need a roaring fire when you can watch this video and hear a loud roaring Hunter Hawker engine?