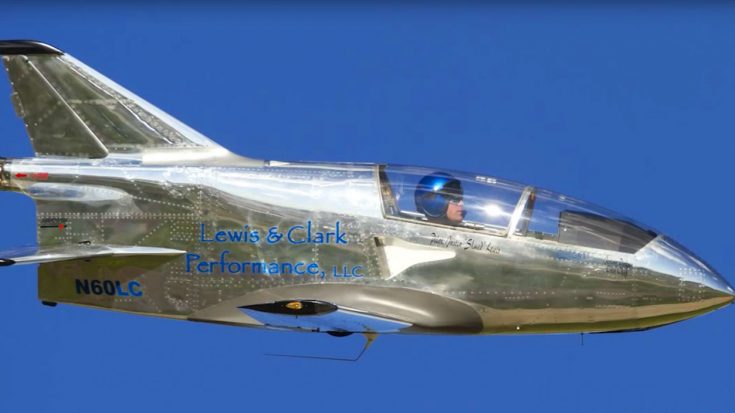 In this world we are often taught that bigger is better, size makes things stand out. But in this case lack of size is what makes the USFleetTracking FLS Microjet stand out from the crowd. Justin Lewis is the lucky pilot of the Microjet and he has nothing but love for this jet. He has been flying aircraft since age 14, mastered many military aircraft and says nothing compares to the Microjet.

“I have a lot of aviation in my background, I’ve flown in an F-14 Tomcat, I’ve flown the A-10 Warthog and I can honestly say that this is the most fun I have ever had in an airplane.”

The 13-foot long plane has a low weight of only 416 lbs and a 265 thrust jet engine, the thrust to weight ratio really gives it an incredible performance. It also has the fastest acting landing gear of any aircraft going, retracting in just moments without interfering with the plane.

“The BD-5 was dubbed ‘The World’s Smallest Jet’ and quickly earned a reputation as James Bond’s jet when it was featured in the movie ‘Octopussy.’ Through the years, a few airshow teams have captivated fans all over the world but today, very few flying BD-5’s still exist.”

It’s a small jet but it is a whole lot of fun to watch. AirShowStuffVideos brings this really cool clip of the Microjet and a brief chat with its pilot, Justin Lewis.