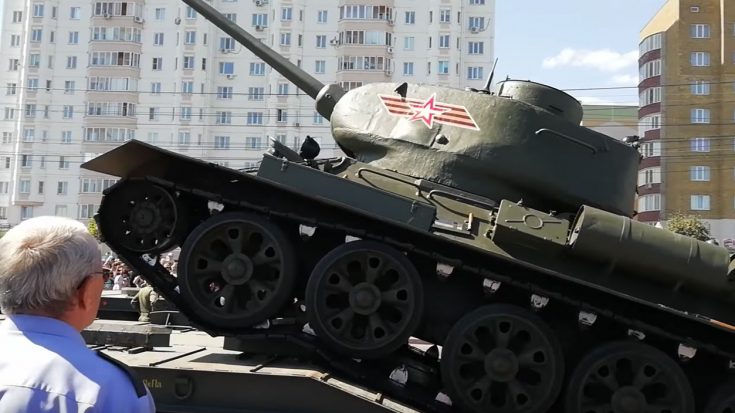 On Thursday, August 23rd, 2018, at about 12 PM local time, a Russian parade celebrating the famous Battle of Kursk ended in a heart stopping way. While loading up at the end of the parade, a tank driver seemingly stepped on the gas a bit too hard and rolled right off the trailer. Luckily, the people on the side of it got out of the way as the tank rolled over on its back and the driver was also unhurt.

The Battle of Kursk was an over month long fight between Soviet and German forces during World War II. In 1943, The Germans believed if they won this battle they’d begin securing the Eastern Front and keep the Allied Forces from messing with Germany.

Little did they know, Russian determination to keep Germany out was greater than they expected. At the end, Germany suffered 50,000 KIAs compared to over 250,000 of Russian troops. Although the losses were great, Russia stopped a major German offensive showing the world Hitler was not an invincible force.

Tanks played a major role in this battle. The Germans were determined to win over Kursk in order to start penetrating Soviet lands, so artillery, a massive amount of troops and heavily armored vehicles were called in. In terms of tanks, Germans brought in almost 6,000 of them while the Soviets had over 12,000. In the end, the Germans lost over 2,000 of theirs while the Soviets lost almost 8,000.

One of the most famous tanks used (the one that’s the subject of the video below) was the T-34. A medium tank produced by the Soviet union, it was hailed as the most influential tank of World War II. So much so in fact that the Soviet Union produced over 168,000 of them in different variants.

To top it all off, it’s been reported the tank in today’s incident was not insured, so whoever owns it will have to foot that bill.