Spitfire From ‘Great Escape’ About To Be Restored To Flying Condition 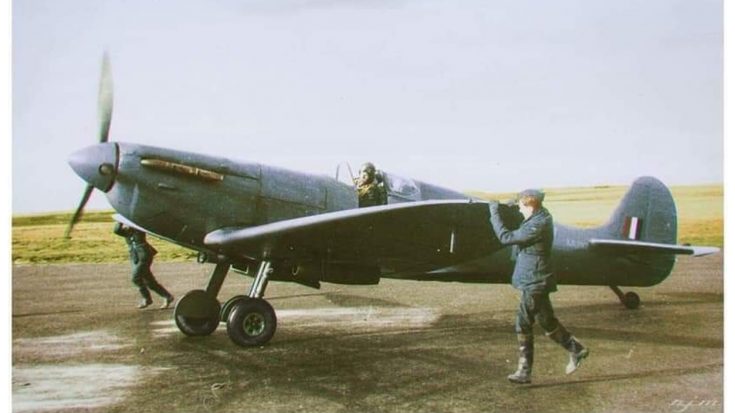 Our 1/24 scale model of Spitfire PR.IV AA810 nicely illustrating the lack of armoured windscreen and the observation bubbles on the hood. AA810 will be fitted with these features, making it the only Spitfire with this style of hood in the world. #Spitfire #WW2 #ScaleModel pic.twitter.com/c5a6weudOx

Spitfire AA810, known as Sandy’s Spitfire, is an impressive aircraft. She’s the earliest example we have today of a surviving PR.IV Spitfire. She also has quite the history, having flown 14 long-range operation sorties. It’s not often you hear of Spitfires going the distance, but this one would often spend up to 5 hours in the air.

AA810 taken at RAF Wick in January 1942 witg Flt Sgt Robert Tomlinson at the controls. Just 5 weeks after this photo was taken, AA810 was lost with Alastair at the controls. Read more about this image at https://t.co/x48qMi7zdw #Spitfire#Aviation #ww2 #spitfireaa810 #AvGeek pic.twitter.com/a4w1s8qfMl

When she crashed with 49 hours and 47 minutes of operational flying, AA810 went down in history as the highest front line houred machine of all surviving MK1s.

During the recovery of AA810 we could not have completed the task without the hospitality of the people from Surnadal. From welcoming us to hauling parts from the mountain to the town – Brage Husby Foss carrying the entire bank assembly from AA810s Merlin on his back! #spitfire pic.twitter.com/RHB19h36ue

Recovered in July 2018, she was still in decent shape at about 70% intact. Thanks to snow and a peat bog, even a lot of the rubber fittings were still in good condition. She’s now undergoing a complete restoration and expected to be flying again by 2023!

Sandy And The Great Escape

AA810 was flown by several pilots operationally. From a pre-war racing driver, the winning jockey of the 1940 Grand National and a future Deputy Chief Pilot at Vickers Supermarine. Read more about these men: https://t.co/xOnFswZyOX#Spitfire #royalairforce #aviation #greatescape pic.twitter.com/BvXSFhNZLG

AA810 had a number of pilots who flew her during their services. But the last pilot to fly her would also never fly another plane.

His name was Alastair Donald McIntosh “Sandy” Gunn. The Flight Lieutenant had learned to fly Spitfires for photo reconnaissance and on March 5, 1942, Sandy was one of six men searching for the elusive Tirpitz.

Experiencing some trouble with the AA810’s engine, Sandy’s attention was focused inside the cockpit when two Bf-109s knocked him out of the sky. He survived, but was captured and sent to Stalug Luft III. Sandy was just the fifth prisoner to arrive and would become a pivotal character in the famous and tragic Great Escape.

Sandy was number 58 to leave the tunnel nicknamed “Harry” that he helped dig. He and Mike Casey, his escape partner, traveled underneath freight trains before being recaptured about 25 miles away from Stettin. Sandy was tragically executed on April 6th after interrogation and his ashes were sent back to the camp. He now rests at the Commonwealth War Grave Cemetery in Poznan, Poland.

And if you’re looking for a good read, pick up a newly published copy of Sandy’s Spitfire by Tony Hoskins!