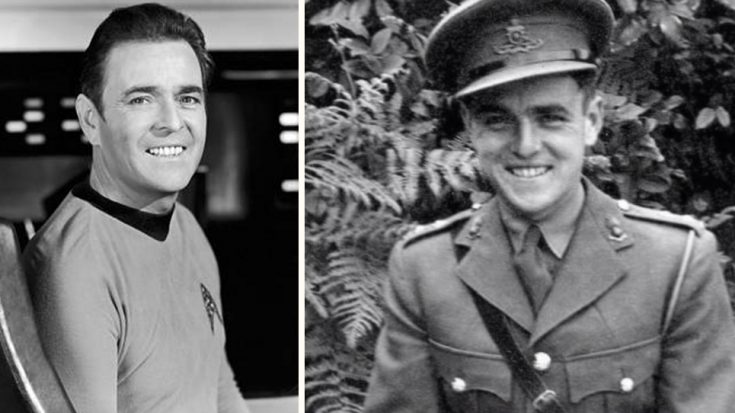 James Doohan, born March 3, 1920, is best known for his role as “Scotty” in Star Trek. But before he ever beamed anyone up, he was busy leading D-Day operations, being a living miracle, and earning the reputation for being Canada’s craziest pilot. Here’s how it all went down:

Doohan, from Canada, enlisted at age 18 and was sent to England in 1940 for training. He did very well and was commissioned as a lieutenant in the 14th Field Artillery Regiment of the 3rd Canadian Infantry Division. On D-Day he bravely led his men through a field of anti-tank mines and personally shot two German snipers.

But then things got very interesting for Doohan.

As he crossed between command posts, he received 6 hits to his body. 4 were to his knee, one blew off his middle finger, and the 6th…well, that one was stopped by a cigarette case protecting his heart. Here’s the kicker though; the shots had come from a nervous Canadian sentry!

After recovering, Doohan became part of the Air Observation Pilot Course 40 with 11 other Canadian artillery officers. That’s right, Scotty was a pilot!

He was trained to fly Taylorcraft Auster Mark V aircraft. Although he never flew in combat and did not officially become a member of the Royal Canadian Air Force, he flew his plane between 2 telegraph poles just to prove it could be done.

This earned him the reputation of the “craziest pilot in the Canadian Air Force.” However, his superiors were naturally not pleased with the antics.

After the war, Doohan began a career in radio and drama, giving us Star Strek’s beloved Scottish Chief Engineer.