This Scene From “Star Wars: A New Hope” Is Exactly The Same As “The Dam Busters” 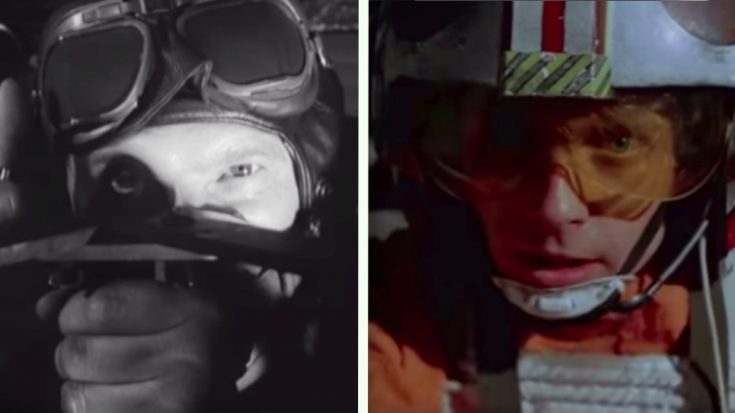 It’s no secret that Star Wars is basically WWII in space. As such, the film series naturally drew upon WWII films that came before it for inspiration. However, some parts of Star Wars are not just closely related to other movies – they’re exactly like them, shot for shot.

A great example of this is the desperate attack against the Death Star from “Star Wars: A New Hope.” The entire sequence was created as a homage to “The Dam Busters”, the 1955 British film based on the RAF’s raid to destroy a handful of German dams deep in German territory.

Here’s how A New Hope was able to pull off the copy-catting and be all the better for it:

Both A New Hope And Dam Busters Had The Same Cinematographer

When you watch the video below, you’ll see that each shot in their respective films has the same quality and style. It makes perfect sense when you realize that it’s because Gilbert Taylor was the man behind both “Dam Busters” and “Star Wars: A New Hope.” Even some of the exact shots from “The Dam Busters” made it into a galaxy far, far away.

Even crazier, if you look closely, you’ll be able to spy German gun towers firing from the surface of the Death Star. The only major difference is that the shots are green and red rather than white.

The Make-Up Artist Was In On It Too

Stuart Freeman was the man who gave us Yoda, Chewbacca, and Jabba the Hutt. We can’t say that he did anything quite as extraordinary in “The Dam Busters”, but that makes two Dam Busters alumnus who were on the Star Wars team.

It’s not just how the sequence is shot either. It’s also the dialogue.

Dam Busters: “I’d say there’s about 10 guns. Some in the field and some in the tower.”

Dam Busters: “I reckon you should be able to see it by now.”

“Star Wars: A New Hope” following in the footsteps of  “The Dam Busters” turned out to be a brilliant move. It grounded the film and made it relatable, but also fun for fans. It’s not something everyone notices. Did you?

For a closer look, below is a video that shows the scenes side by side. See for yourself just how alike they are!