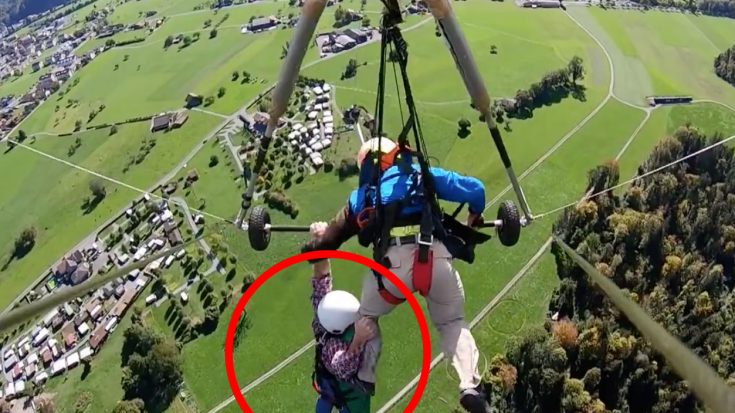 We all love a bit of adventure once in a while, some more extreme than others. When it came to this guy’s first hang gliding experience, however, the experience he signed up for was way more than he bargained for.

Traveling all the way to Switzerland to hang glide over some of the most beautiful terrain in the world, the guy in the video paid for the lessons, the tandem glider ride and also the video package. What it caught was him nearly dying.

Hang-glider holds on for his life after harness not attached https://t.co/t2temqUAsg

He puts in some text over his video throughout the video he got at the end to explain what happened during the flight. First off, a big circle will show you that he just wasn’t strapped into the instructor. That was, of course, the root of the problem.

Then, as the glider took off, it became immediately apparent he was loose from everything and immediately grabbed on to the guide and gradually started slipping down until he was just dangling on the bottom rung. He did so for two minutes which you can imagine was a long time, especially when you’re dangling hundreds of feet in the air.

In the end, he powered through the life or death ordeal and ended up with a broken arm and torn bicep. Not too bad compared to the alternative.