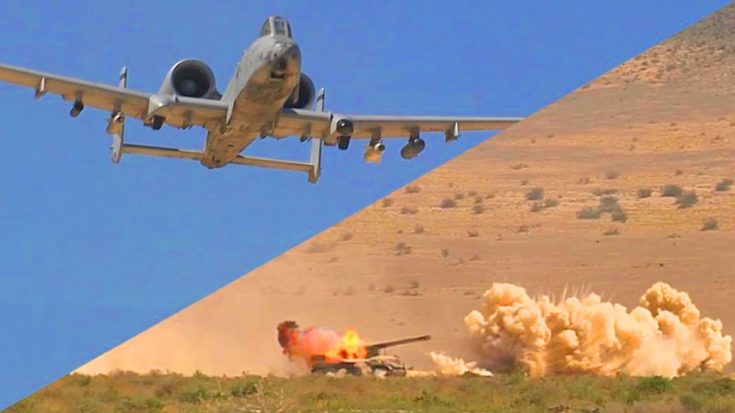 The lethal A-10 Warthog, an infantry unit’s best friend. For 40 years this ground support aircraft has been a helping hand to troops on the ground and a nightmare to those on the receiving end. The rounds from its GAU 30 mm rotary cannon bring the sound of death after their target of already dead because they break the sound barrier.

This is what happens when you take a massive rotary cannon and build a plane around it. Its powerful armor ensures the pilots can dish it out and take it, hell this badboy has been known to lose entire wings in combat and still make it back to home base.

“The primary weapon of the A-10 is the hydraulic powered General Dynamics GAU-8 Avenger 30mm rotary cannon that fires a mix of depleted uranium armor-piercing and high explosive shells at 4,000 rounds per minute with deadly accuracy. The cannon is offset slightly and is just below the aircraft’s center of gravity to avoid its recoil causing any changes in pitch or yaw for the A-10 so it can stay on target.”

The Warthog gained a reputation during the 1970s when it tore apart tanks and heavy armored vehicles of the Soviet Union. It has a lot of nicknames from Thunderbolt, Warthog but in this video, you can clearly see why they call it the Tank Buster.