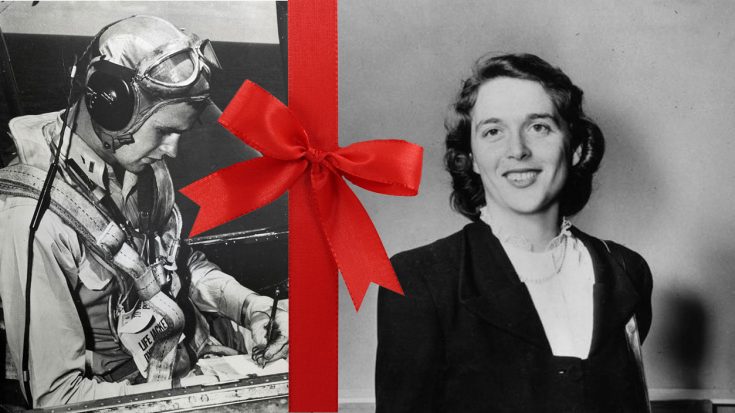 Something To Aspire To.

The two met at a dance when George was 19 and Barbara was 16. Engaged after 1 1/2 years, George went off to fight in World War II as a torpedo bomber pilot for the Navy, writing her letters whenever he could.

Most of you know the entire story of what happened afterward, but no many have read the intimate letters George sent Barb during his service. These make their relationship even more special if that’s even possible.

Here’s a transcript of the above picture.

This should be a very easy letter to write — words should come easily and in short it should be simple for me to tell you how desperately happy I was to open the paper and see the announcement of our engagement, but somehow I can’t possibly say all in a letter I should like to.

I love you, precious, with all my heart and to know that you love me means my life. How often I have thought about the immeasurable joy that will be ours some day. How lucky our children will be to have a mother like you —

As the days go by the time of our departure draws nearer. For a long time I had anxiously looked forward to the day when we would go aboard and set to sea. It seemed that obtaining that goal would be all I could desire for some time, but, Bar, you have changed all that. I cannot say that I do not want to go — for that would be a lie. We have been working for a long time with a single purpose in mind, to be so equipped that we could meet and defeat our enemy. I do want to go because it is my part, but now leaving presents itself not as an adventure but as a job which I hope will be over before long. Even now, with a good while between us and the sea, I am thinking of getting back. This may sound melodramatic, but if it does it is only my inadequacy to say what I mean. Bar, you have made my life full of everything I could ever dream of — my complete happiness should be a token of my love for you.

Wednesday is definitely the commissioning and I do hope you’ll be there. I’ll call Mum tomorrow about my plan. A lot of fellows put down their parents or wives and they aren’t going so you could pass as a Mrs. — Just say you lost the invite and give your name. They’ll check the list and you’ll be in. How proud I’ll be if you can come.

I’ll tell you all about the latest flying developments later. We have so much to do and so little time to do it in. It is frightening at times. The seriousness of this thing is beginning to strike home. I have been made asst. gunnery officer and when Lt. Houle leaves I will be gunnery officer. I’m afraid I know very little about it but I am excited at having such a job. I’ll tell you all about this later too.

The wind of late has been blowing like mad and our flying has been cut to a minimum. My plane, #2 now, is up at Quonset, having a camera installed. It is Bar #2 but purely in spirit since the Atlantic fleet won’t let us have names on our planes.

Goodnite, my beautiful. Everytime I say beautiful you about kill me but you’ll have to accept it —

I hope I get Thursday off — there’s still a chance. All my love darling —