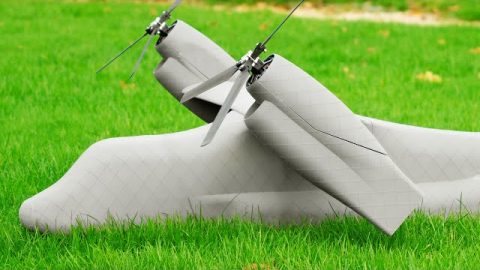 This guy built a scratch-built model that looks and flies just like the real thing- a full-scale V22 Osprey. A full-scale Osprey is a plane with a helicopter on each of its wingtips, giving the needed control during a hover.

Having access to both model helicopters and model planes, he decided to merge both together just like the real thing! A number of people have achieved this feat in the past by modifying heavily off-the-shelf helicopter designs, but it isn’t always the most practical option.

He built and tested a two-rotor aircraft using 3D-printed helicopter rotor heads for control. Each blade of these rotor heads is freely hinged, and with some precise motor movements, it provided enough control to keep the plane flying.

While it didn’t fly the first time in part one of the video, it was fixed with a stronger wing spar and redesigned motor mounts. Enjoy!